Luciano Lewis has been named as one of among at least three teens who were involved in the tragic murder of Tessa Majors.

Majors, a Barnard College student, was viciously stabbed during an armed robbery-gone-wrong in Morningside Park, just blocks away from the school, back on December 11, 2019.
Turns out Lewis had been previously questioned by police but was let go uncharged. Even a search warrant was executed at his home at some point.
The 14-year-old surrendered to police on Wednesday and is expected to be arraigned later today. According to outlets, he will be charged as an adult. 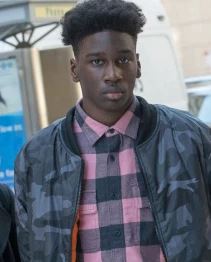 The first of the three teenagers to be arrested was Zyairr Davis -who was charged with murder back in December. At the time the 13-year-old admitted to police that he participated in the robbery however, he did not participated in the stabbing that led to Majors’ tragic death.
According to detectives, David told them that he and two of his friends/classmates -entered the park that day with the intention of robbing someone. According to his own account, he watched his friends grab the victim, put her in a chokehold and remove items from her pocket. Davis also told investigators that he witnessed Tessa get stabbed.

The other two have been identified as Rashaun Weaver 14, who has been named as the knifeman -was charged with robbery and second-degree murder last week; and now 14-year-old Luciano Lewis, who becomes the last and final murder suspect to be finally arrested.

Lewis was escorted into Manhattan Supreme Court just before noon for his arraingment. The arrest of the third suspect comes more than two months after Majors, an aspiring journalist and musician from Charlottesville, Virginia, was repeatedly stabbed in Harlem’s Morningside Park.
It is not yet clear who are the parents or who is responsible for middle school-age Luciano Lewis.