Max Ehrich is the new man in the life of superstar singer and actress, Demi Lovato, the two were recently spotted together and we just want to learn everything about him!

Quarantine has made stars isolate for days without end and that means spending major quality time with those close to your heart. The measure has also resulted in stars revealing new flings perhaps?

According to reports, the new couple have been dating ‘quietly’ for some time; they were spotted in Los Angeles earlier this month and sources say they are going strong.
It’s safe to say they are still in the early stages but are comfortable enough to leave flirty messages on each others social media.
A few days ago, Ehrich wrote captioned a photo on Instagram ‘When u realize u should’ve packed more for your quarantine stay.’ Demi commented, ‘Fine by me.’ 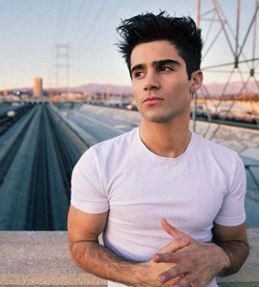 Getting back to Max Ehrich, he isn’t just an ordinary person. The dude is an actor, singer and dancer.
Born June 24, 1991; the New Jersey native is perhaps best recognized for his roles as Fenmore Baldwin in The Young and the Restless.
Max Ehrich had a two episode arc on Shake It Up back in 2010 alongside Zendaya and Bella Thorne. He was also a backup dancer in High School Musical 3.
Since then, Max has proved he’s more than just a soap star, and has been in Under the Dome and American Princess. He also appeared on some of our favorite 2000s shows like Ugly Betty and iCarly.
Though no one is throwing him a record deal, Max regularly posts clips which show off his impressive vocals.

He is definitely no simple guy, and has a million followers on Instagram.