Robert Giuffre is the husband of Virginia Roberts -who is said to have been one of late Jeffrey Epstein’s victims.

Robert’s wife Virginia Roberts Giuffre has been one of Epstein’s most vocal accusers, alleging he recruited and groomed her as a 16-year-old in Florida to have s**x with him and other rich and powerful men.
She first came forward in 2015 claiming to have been used as a s**x slave by the disgraced financier -who committed suicide in his prison cell in New York as he awaited trial on charges of s**x trafficking.

Virginia who now goes by Virginia Giuffre, claimed Maxwell, Epstein’s former girlfriend and alleged madam, groomed underage girls for him. In addition to Epstein, Virginia says she was procured as a teen s** slave for his pal, Prince Andrew. 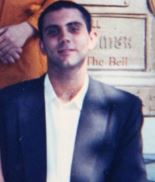 Virginia was born in 1983 to Sky Roberts, an odd-job man and “horse-loving cowboy”, and Lynn, a bank worker who already had a two-year-old son Daniel from a previous marriage. The family lived in Sacramento, California but moved to Loxahatchee in Palm Beach County, Florida, when Virginia was just four years old.
Her involvement with Jeffrey Epstein began in 1999 when she was 15 years old and working as a changing room assistant at Donald Trump’s country club Mar-A-Lago in Palm Beach, Florida.

At the age of 19, Virginia went to Thailand to take a massage course which was arranged by Ghislaine. There she Robbie Giuffre. They wed within ten days of meeting. Virginia Giuffre, lived in Australia with her husband and their children but moved back to the US in 2014.

Robert Giuffre met Virginia Roberts in Thailand in the early 2000’s and were married in 2003. According to the Daily Mail, the two were married just 10-days after meeting.
The couple settled in Queensland and have since welcomed three children.

Robert, an Australian martial arts expert now working on the fringes of the fashion industry.