Tommy Callaway has been identified as the despicable man/runner who deliberately slapped female reporter on the job, Alex Bozarjian.

Alex Bozarjian is a WSAV-TV reporter who grew up in Salem, Massachusetts. Her TV experience has taken her to several places including Florida and Cuba.
She graduated *** laude from the University of Central Florida with a bachelors degree. She double majored in Broadcast journalism and Latin American Studies.

The incident which left Alex in pain and total shock -has been denounced by users calling Callaway all kinds of names. He was also banned by the organizers of the race from running in future events.
Callaway is not facing any criminal charges at this time, but is up to Bozarjian if she wants to do it. 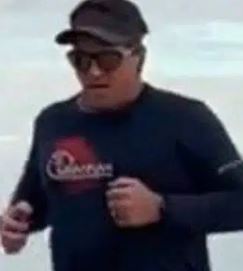 Since then, Callaway issued a statement through his attorney saying “While we regret the situation, Mr. Callaway did not act with any criminal intentions. Tommy is a loving husband and father who is very active in his community. We have been in touch with WSAV and representatives for Ms. Alex Bozarjian, as well as members of Savannah law enforcement. We do not expect any criminal charges to arise from this incident, and we are working with those involved to correct the situation.”

As expected, 43-year-old Tommy Callaway full name, Thomas Reuben Callaway -has deleted his social media. However we do know a few things about. Callaway who works in sales -is happily married and is the father of daughters. He and his wife have been married since 2015.
The salesman is allegedly well known in the community and to make matters a bit more interesting he happens to be a youth minister at his church.

According to his LinkedIn, Callaway attended Armstrong Atlantic State University from 1994 to 1996 and then graduated from Georgia Southern University with a degree in business management and human resources in 1998.
Tommy Callaway works in sales at Swedish Match North America in Statesboro, Georgia -for over a decade. He previously worked as a sales representative and in sales at American Standard Brands, United Distributors and Cbeyond and as a district manager at Royal Cup Coffee.