Tom Holland, the English heartthrob you know from playing Spider Man, may be in a relationship with a mystery blonde!

The 23-year-old actor was spotted hanging out with a mystery gal while the two celebrated with double beers at British Summer Time Hyde Park Festival in London. According to TMZ, the pair appeared to be water cups as they went off to watch music acts.

Judging from the pictures, the two seem pretty comfortable whit each other, whit the blonde chick even putting her hand on Tom’s **** as if she’s claiming something perhaps? All and all, things seem pretty romantic between the two, they even wore matching outfits as they dressed in all black.
Tom was rumored to be dating co-star Zendaya but the two never confirmed it. 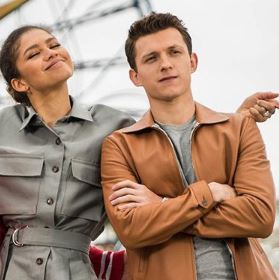 Born June 1, 1996; the English man, is the son of Nicola -who has worked as a photographer and his father, Dominic, is an author and a comedian. Tom is the oldest of the couple’s four sons. Tom has a pair of younger twin brothers, Harry and Sam. He also has another younger brother named Patrick.

Tom who was drawn to performing at a young age, he played the title role in Billy Elliot the Musical at the Victoria Palace Theatre, London, in 2008 at age 12.
He attended Donhead Preparatory School before being accepted by the BRIT School for Performing Arts and Technology. He later appeared in the UK version of The Secret World of Arrietty.

He also took hip hop classes at Nifty Feet Dance School and his potential was spotted by a choreographer.
From there he landed a role in the 2012 film “The Impossible.” Tom first appears as Spider-Man in the 2016 Marvel film Captain America: Civil War.
Then came his debut starring role as the superhero in the 2017 film Spider-Man: Homecoming. Since then, he’s reprised his role in Avengers: Infinity War, Avengers: Endgame and most recently, Spider-Man: Far From Home.

There’s no doubt that Tom Holland is super hot appearing everywhere these days and his mystery gal also seems to think so. As of now, there’s no word on who the blonde chick is.