Tatyana Kasatkina is the brave stewardess who saved a number of passengers on board the Russian plane that burst into flames over the weekend. The 34-year-old flight attendant is being praised for saving many lives.

Kasatkina was a crew member on the Aeroflot flight SU 1492, which was traveling from Moscow to the northern Russian city of Murmansk and which suffered a crash-landing on Sunday shortly after take-off. A total of 41 people died in the tragedy. Other passengers who survived have said they are only alive thanks to the crew.

Thanks to Tatyana’s heroic efforts and quick thinking she managed to put many of the passengers to safety. Flight attendants onboard were Tatiana Kasatkina, Maxim Moiseev and Ksenia Vogel. 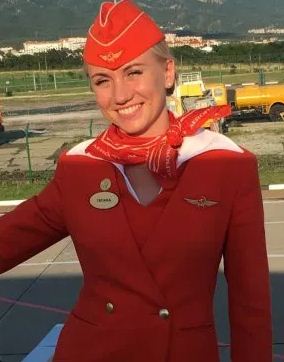 “We took off and flew into a cloud, it was hailing heavily. At that moment there was a bang, this kind of flash, like electricity. It all happened very quickly,”

“When the plane stopped, the evacuation began right away. I was just kicking them out the door, so that they didn’t get jammed … Just was grabbing each one by the collar”

Tatyana explained how evacuation was hindered by passengers trying to get their luggage that blocked escape routes. While passengers screamed for help, Tatyana kicked the plane’s door open and physically pushed passengers out onto the emergency slide to safety.

Tatyana Kasatkina works for Aeroflot Russian Airlines, the experienced flight attendant is currently based in Russia. Thousands have signed a petition to ban the Russian-made Sukhoi Superjet 100 involved in the tragedy.