Jahkoy Palmer is the lucky boyfriend of Aussie fittness model Tammy Hembrow -who has taken over the world of Instagram and has a massive following.

Jahkoy’s fitness entrepreneur girlfriend recently had to take some time off from social media after she received major backlash form users after the stunner chose to promote her bushfire fundraising efforts with a raunchy snap.

Tammy who is half-Australian and half-Trinidadian, was born April 22, 1994. She has two sisters, Amy and Emilee and her father’s name is Mark.
She has made a name for herself as a mommy blogger and fitness guru, known for documenting her body pre and post pregnancy to inspire other mothers to get the body they desire after giving birth. She has earned over 10 million Instagram followers.
As well as dominating Instagram she has a huge YouTube following too, sharing her workouts and family life with her 1.2million subscribers. 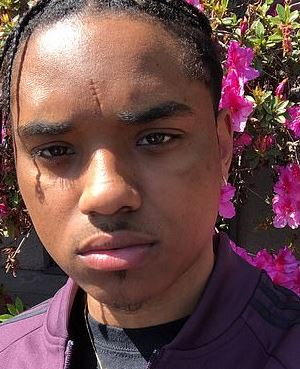 Since then, the gorgeous blonde has also gone onto to do sponsored Instagram posts for Protein World and Teami Blends.

Prior to her relationship with Jahkoy Palmer she was actually engaged to personal trainer Reece Hawkins; however it was later announced they split in 2018. During their relationship they welcomed two children a son, Wolf and a daughter, Saskia.

She and Jahkoy Palmer have been dating on-and-off for over a year. Is not clear if the two are currently together. Back in December Palmer allegedly apologized to the mom of two and begged her for a second chance.
He has since uploaded an image in which they appear to have rekindled their on-off romance.

Palmer who was born March 23, 1994; is a singer and rapper. The Canadian native began writing poetry from the age of 11 and would turn his poems into raps. When he was 14, he went by the stage name Raheem, and would transition back to Jahkoy when he was 19.
He released his mixtape Forward Thinking in 2015. Since then, he’s collaborated with Schoolboy Q, Willow and Jaden Smith.
In 2016, he signed to Def Jam Records releasing his EP ‘Foreign Water’, and in 2017 he went on tour with Ella Mai and Kehlani. His new project, 404, was released in 2018.