Jon Brion is known as a producer, songwriter, and multi-instrumentalist -who is said to have collaborated in Mac Miller’s posthumous new album.

Jon who had been collaborating on the album with Miller continued work after the artist’s death. The forthcoming album, “Circles,” is a companion project to Miller’s 2018 album “Swimming.”

Jon Brion was born December 11, 1963; the Glen Ridge, New Jersey native is the son of a band director father and his mother sang in jazz bands.
He rose to become a rock and pop multi-instrumentalist, singer, songwriter, composer and record producer.
Brion attended special education class at Hamden High School in New Haven, CT, and left school for good after turning 17. He then made the move to Boston in 1987. But it was in California that he formed the early 90s band the Grays.

Throughout the ’90s, Brion found himself increasingly in demand in the studio, producing and collaborating on albums by Aimee Mann, Fiona Apple, Rufus Wainwright, David Byrne, and the Eels. He also released a lone solo record, Meaningless, in 2001. 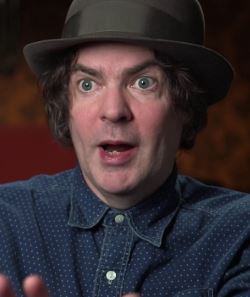 Brion is also described as an acclaimed film composer and producer who has been in the business for decades.
As a film composer, he first teamed with Paul Thomas Anderson for the director’s 1996 debut, Hard Eight. Other film scores include Punch-Drunk Love and Eternal Sunshine of the Spotless Mind and Lady Bird. He’s also known for his production work, which ranges from the piano ballads of Fiona Apple to the chamber pop influence he lent to Kanye West’s Late Registration.
In addition to his prolific studio work, he also has held a long-term position as “the house band” Friday nights at the high-profile Hollywood nightclub Largo -where attendees can expect surprise guest appearance and witness Brion make up songs on the spot.
The 56-year-old is believed to be single, he was in a relationship with actress, Mary Lynn Rajskub.