Once more a horrific shooting has claimed the lives of several people; the shooting rampage that targeted Christians at a community college in Oregon, left a total of 9 victims, including Sarena Dawn Moore.

Sarena Moore is one of 9 fatal victims from the the Umpqua Community College shooting in Roseburg, Oregon that took place October first.

Sarena Moore was from Myrtle Creek, according to the sheriff’s office. She was a member of Grants Pass Seventh-day Adventist Church in Grants Pass, about 70 miles south of Roseburg, the church said.

“It’s been … reported that one of Sarena’s last posts on Facebook was an affirmation of her desire to stand up for Jesus and Christianity,” Pastor Christian Martin wrote on Facebook. 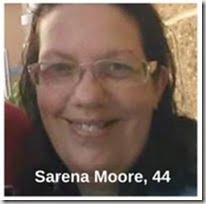 Moore was the mother of two adult sons. She was a student at the college, in her third semester studying business, the Adventist Review magazine reported.

Moore was known as a strong believer in the power of prayer, said the pastor of the Grants Pass church, and often wrote messages about her faith on her Facebook page. Moore was a graduate of high school in Reno, Nevada. Her social media showed a passion for animals.

The gunman, identified as 26-year-old Christopher Harper Mercer, also lost his life. It was initially believed he was killed in an exchange of fire with police but it was later confirmed he shot himself. Witnesses say, Mercer asked students about their religion before opening fire.

New details of the senseless shooting have emerged and according to the NY Post, Sarena was the woman who was in a wheelchair and who owned a service dog.

Reports say Mercer showed no remorse when he allegedly ordered Sarena to get down on the ground and later telling her to get back on the chair.

When Sarena Moore tried to climb back on the chair, she was shot by Mercer. According to The Washington Post, Sarena had been in and out of a wheelchair due to a number of health related issues.

She is survived by her two sons and brother, Rick Goin. Our deepest condolences to all the families.