Benjamin Sosne is the current boyfriend of model and most recently Dancing With the Stars cast member, Sailor Brinkley.

Benjamin’s gorgeous girlfriend is well known as the daughter of model mom, Christie Brinkley and Peter Cook, Christie’s fourth husband. The couple tied the knot in 1996 and welcomed daughter Sailor before divorcing in 2008. The divorce proceedings attracted major media attention after Cook admitted that he had an extramarital relationship with an 18-year-old woman and that he was addicted to internet adult videos.

21-year-old Sailor has followed into her mother’s footsteps as a runway and fashion model. However, in recent weeks she was asked to fill in for her mother who had been casted on DWTS but had to leave the show after breaking her arm during rehearsals. 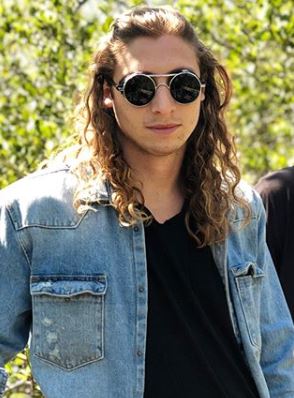 On her ABC bio, the gorgeous blonde calls herself a model/filmmaker and photographer. Sailor who began modeling at 15 has been featured in Teen Vogue and is represented by IMG Models.
Sailor appeared alongside her mother, Christie Brinkley, and sister, singer/songwriter Alexa Ray Joel, in the 2017 Sports Illustrated Swimsuit Issue.
Additional editorial credits for Sailor include the covers of Avenue, Daily Front Row and Bella as well as fashion stories in Seventeen, Town & Country, Beach Magazine, New York Post and a Marie Claire special issue with Fabricio Ferri. She made her runway debut in Milan walking for Dolce&Gabbana during spring 2018.
She has contributed as a photographer for Sports Illustrated and hopes to work with National Geographic in the near future.

Sailor has been in a romantic relationship with long haired blonde, Benjamin Sosne for a few months. The young couple was first linked together last December. In March of 2019 photos of the two hanging out emerged.

Benjamin Sosne who goes by Ben Sosne is originally from Southampton, New York. He attended Ross School and later University of Miami.
According to his LinkedIn, he was a student from the University of Miami from 2014 until 2017 where he majored in Public Relations/ Image Management.
While attending the School of Communications at the University of Miami, Ben served as a Media Consultant for Miami Beach Polo and was a member of the Foreign Film Club. He produced and directed Red Label in 2014 – a film about alcohol abuse in college dorms as well as Spray -a short film portraying winter in the Hamptons.

Benjamin Sosne has also worked as an Inventory Manager for Ralph Lauren. From 2010 until 2012 he served as a legal assistant at Alan Sosne, was a product ambassador for Good Life Clothing and most recently is listed as a Catalyst Public Relations Inern at WME|IMG Speakers, since 2015.