Nicholas Forman is or was until recently, the boyfriend of murdered college student, Sabrina Harooni of Gilbertsville.

Nicholas, of Montgomery County, is said to have murdered his girlfriend following an argument witnessed by their Uber driver. Reports say the young couple were coming back from a night out, the two had been at a restaurant where they watched the Super Bowl.

The Uber driver told police the couple got into a fight in the backseat over a text message. The two allegedly continued fighting at Forman’s rented home.
According to an investigation, Forman is said to have assaulted Harooni who died from injuries to her head, face and neck. Blood and hair evidence was found outside the home where police believes Forman allegedly brutally assaulted Sabrina. Forman is being charged with first-degree murder. 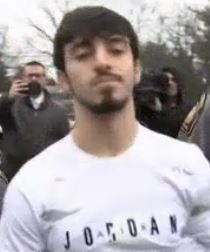 Shocking and sickening reports say 23-year-old Forman then took a shower and went to a scheduled court hearing and only then, he took Sabrina to a hospital where she was pronounced dead. Doctors at the hospital called authorities and her death was ruled a homicide. The two had been dating for about seven months.

Nicholas Forman who denied all charges, also has hanging on his neck drug felony charges for selling cocaine and criminal use of a communication facility. While he attended a preliminary hearing for those charges, his girlfriend was dying from her wounds. After the court hearing, all charges were held.

Instead of taking the blame, Forman told authorities Sabrina was beaten by three women. However investigators found a video in his cellphone showing him standing over Harooni’s badly injured body on his lawn. “This is what a cheating liar gets,” a male voice in the video said, according to police.

According to his social media, he is originally from Philadelphia, Pennsylvania. He went to Archbishop John Carroll High School and is a student at Montgomery County Community College. Forman is also listed as a server at Olive Garden.