Jung Sun-Young’s South Korean film director had a huge weekend at the Oscars, as the 50-year-old director took home not one but four awards, including Best Director.

Born, September 14, 1969; he grew up in South Korea watching Hollywood movies. In college, he majored in sociology, but his interests veered more toward two other subjects: the pro-democracy protests that were then gripping Korea and his first love, the movies.

Since becoming a writer-director, he has been breaking box office records in Korea, then sweeping the Korean equivalent of the Oscars, then crushing the American box office.
His debut feature, 2000’s Barking Dogs Never Bite, wasn’t very good. “Please forget it,” he said recently. His sophomore film, 2003’s Memories of Murder, a Zodiac-esque study of the failed search for Korea’s first serial killer, catapulted him to the apex of Korean cinema, winning him best picture and best director at the country’s top cinema honors, the Grand Bell Awards. As successful as Memories of Murder was, it was Bong’s third film that launched him into the stratosphere. 2006’s The Host was a blockbuster in every sense of the word. His other work includes, Mother, Snowpiercer and 2017’s Okja.

After taking home four Oscars, Bong Joon-ho did what was right and thanked his wife during his accepting speech saying “I thank my wife, who always inspired me, and the ‘Parasite’ actors who beautifully delivered the lines on screen.” 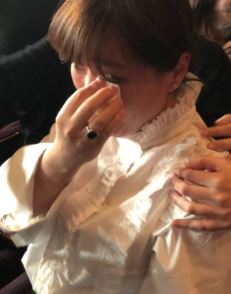 The name of his wife is Jung Sun-Young -and during the ceremony the proud director’s wife couldn’t hold her tears, of joy of course, for her husband’s hard work.
The two have been married for decades, 24-years to be exact. However, not much is known about Jung Sun-Young -who keeps a low profile despite being married to a famous director. She is a supportive spouse to say the least, according to outlets Sun-Young accompanys him suring film tours.

Bong Joon-ho and wife Jung Sun-Young are the proud parents of one adult son, Bong Hyo-Min.
Their son has followed into his father footsteps making his directorial debut with the short film “Wedding” back in 2017.