Chelsea’s husband has made a run of successful films, most of which mix comedy with moments of drama. On Sunday, the 44-year-old picked up his first Oscar for the Jojo Rabbit screenplay.

Born August 16, 1975; in Wellington, New Zealand -Taika who also goes by Taika Cohen, attended Victoria University of Wellington and won the Billy T Award as part of a comedy duo in 1999. Waititi graduated from Victoria University in 1996, with a degree in Theatre and Film.
His first major TV role came in the early 2000s show The Strip. Also as an actor, he played Tom Kalmaku in 2011’s Green Lantern.
Taika who simultanouesly has worked as a director, is known for his movies What We Do in the Shadows and Boy, the latter of which became New Zealand’s highest-grossing film. His 2004 short film, Two Cars, One Night, was nominated for an Academy Award. He was chosen to direct 2017’s Thor: Ragnarok, the third movie in the franchise. 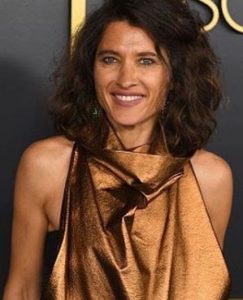 Taika who is also an experienced painter and photographer, is currently married to wife -Chelsea Winstanley.
He and wife Chelsea Winstanley; are the proud parents of two daughters, Matewa and Te Hinekahu. She is also the mother of one adult son, from a past relationship, son Maia.

Chelsea Winstanley isn’t only Taika’s wife and the mother of his children, the New Zealander stunner is an award-winning film producer, writer and director. In fact she was the producer for Jojo Rabbit. She attended Waikato University and Auckland University.

Chelsea who is of Ngati Ranginui and Ngai Te Rangi descent, is also the producer of What We Do In The Shadows -launched her own production company ‘This Too Shall Pass’ in 2020.
Chelsea Winstanley will also debut her writing and directing with The Appeal. Winstanley has previously directed several shorts and a segment of the TIFF anthology movie Waru. Her producing credits also include Sundance 2019 doc Merata: How Mom Decolonized the Screen and Merata Mita’s domestic abuse doc Saving Grace, Te Whakarauora Tangata.
In 2018, Chelsea opened up about being a sexual abuse survivor.