Paulina’s husband sadly passed over the weekend from hypertensive and atherosclerotic cardiovascular disease. He was 75.
The Cars sold more 23 million albums in the U.S. alone in their heyday, which lasted from 1976 to 1988. They had more than a dozen Top 40 hits, four of which — “Drive,” “Shake It Up,” “Tonight She Comes” and “You Might Think” — landed in the Top 10.

During his lifetime, Ric married three times and fathered six sons. He and second wife, Suzanne ended in divorce after he met then model, Paulina Porizkova in the 80’s. He is survived by third wife Paulina and sons, Christopher, Adam, Derek, Eron, Jonathan Raven and Oliver. 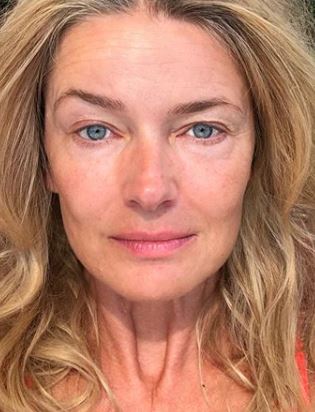 Ric Ocasek and Paulina Porzikova met in 1984 while recording a video for hit song, Drive. The couple tied the knot in 1989 and were together for 28-years prior to their separation in 2017. The two however, were never legally divorced. Over the course of their marriage, they welcomed sons, Oliver and Jonathan.

Born in Czechoslovakia on April 1965, Paulina made a name for herself as a fashion supermodel, actress and author. Porizkova was 18 years old when she graced the cover of the famous Sports Illustrated swimsuit issue. She was the first Central European woman to gain that honor.
She’s participated in modeling campaigns for brands such as Calvin Klein, Estee Lauder, Ann Taylor, Barney’s New York, Oscar de la Renta and more.
In addition to her acting and modeling work, Porizkova also appeared on the popular modeling reality show America’s Next Top Model for two seasons.
Her acting credits includes roles in Anna, Arizona Dream, Dark Asylum, Desperate Housewives and a number of TV shows.
Paulina who is still active in the modeling world, is also a published author, she co-authored The Adventures of Ralphie the Roach, a children’s book.