Luis Alvarez is the retired NYPD detective who angrily testified before Congress Tuesday to defend 9/11 responders and survivors.

Alvarez along with other first responders, entertainer Jon Stewart and medical professionals came to Washington to fight for Congress to permanently extend the 9-11 Victim’s Compensation Fund.

When his time to speak came, he told representatives

Alvarez said he considered himself fortunate to have had the opportunity to go through the pain and suffering of so many treatments, but considers it his legacy to see that Congress do the right thing for all 9/11 responders. 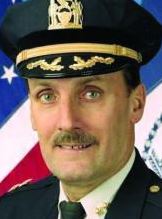 Luis Alvarez is a retired NYPD bomb-squad detective. The 53-year-old is currently fighting stage 4 colon cancer – it’s spread to his liver. Tomorrow will be his 69th chemo treatment. He was diagnosed with colorectal cancer in 2016.

Det. Luis Alvarez was supposed to work from 10a-6p on September 11th. That morning when he turned the TV on – he right away jumped into the car and went to work. He worked 12 hrs shifts for weeks after searching for bodies.

His cancer is tied to the time he spent searching roof tops for victims soon after the towers fell, and on the “bucket brigade” trying to salvage the remains of his NYPD and FDNY brethren.

According to the Daily News, this isn’t the first time Luis Alvarez makes a similar trip. Back in February he came to Washington, to talk to lawmakers in person. He has made repeated trips to Washington, interrupting his life and medical treatment, only to convince more than 300 members of the House to support this round of 9/11 legislation.