Phil Peters is the long time husband of actress, Theresa Saldana, best known for her role as Rachel Scali, in the 1990s television series The Commish. His wife of 27-years passed away at age 61.

Accoridng to reports she died at Cedars- Sinai after being hospitalized on Monday. The actress –who played  the wife of Police Commissioner Tony Scali from 1991 to 1996 –made headlines after having a near death experience in the 80’s.

Saldana was stabbed by a deranged fan outside her L.A. home. back in 1982. She survived the violent attack thanks to a delivery man who happened to be driving by and witnessed the incident.

Throughout her career, she participated in several films including, the 1978 film Nunzio, I want to hold your hand (1978); Defiance (1980); Of Men and Angels; and action film, Angel Town.

She made a number of appearances in hit TV shows including The Twilight Zone, MacGyver, Law & Order and T.J. Hooker. She also appeared in the classic sports drama Raging Bull alongside Robert De Niro, playing the wife of Joe Pesci’s Joey LaMotta. 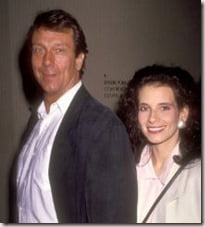 Before she retired from acting in 2004, Phil Peters’ wife was the recepint of many awards, among them: a Golden Globe Award nomination, best supporting actress in a television series, miniseries, or movie, 1994, and Bravo Award, National Council of La Raza, outstanding television actress in a crossover role, 1996, both for The Commish; ALMA Award nomination, American Latin Media Arts awards, outstanding actress in a daytime soap opera, 1998, for All My Children; Lifetime Achievement Award, Southern California Motion Picture Council.

She was also a vocal advocate for stalking victims. She was the founder of the self–help group Victims for Victims.

Phil Peters is also the father of another daughter from his first marriage. He was previously married to actress Lenore Kasdorf. They were married from 1977 until 1983. From his previous union with Lenore he fathered daughter, Vanessa Peters, born in 1980.

We send our condolences to her husband and rest of her family and friends.