Monica Ruiz is an actress best known for the infamous Peloton ad and now she’s back at it.

Monica, a pretty brunette was booked for another commercial gig, this time she appears on a spot for Ryan Reynolds’ Aviation Gin. In the ad, she can be seen sitting at a bar with two friends staring blankly.

As described by Bloomberg, “This gin is really smooth,” she finally says after a long, thoughtful pause. The friends assure her “you’re safe here” and toast “to new beginnings.” Then Ruiz downs a gin martini in a single sip. The clip closes with a shot of an Aviation bottle. “You look great, by the way,” one of her friends says. 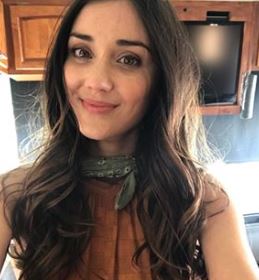 Ruiz previously made headlines after appearing on the holiday ad for Peloton Interactive Inc. -in which she plays a woman documenting a year in her life with the Peloton bike her male partner gave her. The ad struck some viewers as sexist, insensitive and out of touch.
A graceful Monica Ruiz told media that, she was happy to do the Peloton ad, “and the team was lovely to work with.”

Ruiz is a California native who graduated from the University of California – Santa Barbara. She holds a degree in sociology. In past interviews, she stated she hoped she could teach elementary school.
As for her personal life, we know that the good looking dark haired actress, is married to Christopher O’Malley. The couple has been married since 2013 and together have welcomed two children. Monica Ruiz is the proud mother of two boys, Mike and Miles.

According to her IMDb profile, she’s been featured in a number of projects including About a Boy (2014), The Game (2006) and The Birthday Boys (2013). She is currently signed to LA Talent agency. Ruiz is also associated with Tricia Brink Management. In addition to acting, she’s also experienced in modeling -which she started doing since high school. Moreover, she’s worked with CGM Models Miami and Brand O.C.
She’s appeared on the cover of the magazine Pregnancy and Newborn in July 2018 as well as modeling maternity wear for Gap.

Any thoughts on where we’ll see Ruiz next?
Find Monica Ruiz on Instagram here.