Kyra Robinson Epps became the second and current wife of actor/comedian Mike Epps. The couple officially said I Do over the weekend.

The love birds tied the knot in a star-studded ceremony, attendees included T.I. and Tiny, Doug E. Fresh, Snoop Dogg, and more. The wedding took place in New Port Beach, California.
This makes the second marriage for the 48-year-old comedian and actor, who was married to actress Mechelle McCain.

Kyra Robinson or the new Mrs. Epps -is a television producer who has worked for OWN. According to her social media bio, Kyra Robinson works for the Oprah Winfrey Network as a producer on Iyanla: Fix My Life. And that’s not all, the Chicago native is an NAACP/Image Award Winning Producer and recently spoke for the United ***** College Fund in Chicago, where she stressed the importance of higher education and self-determination to young future leaders. 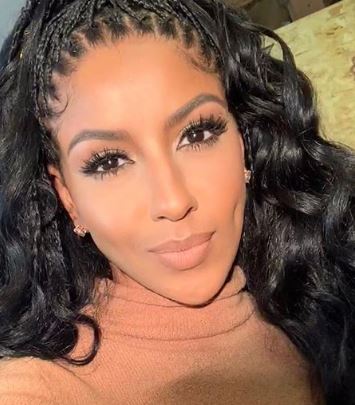 She is also the creator of “Sounds Fun,” an app which was released on the Amazon Echo. Robinson created the app to initiate a fun environment for hosting social events among family, friends or colleagues.

That means, Kyra Robinson isnt only easy on the eye, the stunner has brains to go along. She holds a degree from Columbia College and works for Oprah! How bout that!
It is not yet clear how the two met exactly but their relationship was first reported in 2017. Epps then popped the question in May 2018 and a now a year later, they are husband and wife.

Mechelle and Mike wed in 2005 and share two daughters together. According to the report, Mechelle put her acting career on hold to focus on being a mother and wife. Unfortunately, things didn’t work out and the couple called it quits after 15 years together. The pair split in 2017.
Mechelle McCain devotes her time as a philanthropist with her non-profit, Kids Love and Health Foundation. The organization is dedicated to teaching health and wellness to underprivileged through a variety of programs.

She is the mother of the former couple’s two daughters, Maddie and Mariah Epps. Mike also has two more daughters from a previous relationship.