Curtis Sliwa is the former partner of Queens Borough President, Melinda Katz -currently a candidate in the Democratic primary for Queens district attorney.

Curtis’s partner was elected on November 5th, 2013 to serve as the 19th Queens Borough President. The 53-year-old New Yorker, has been a public servant for over 20 years, serving in key governmental positions on both the city and state level.
She graduated summa *** laude from the University of Massachusetts, Amherst and received her juris doctorate from St. John’s University School of Law.
Melinda represented Forest Hills, Rego Park, Kew Gardens and parts of Maspeth, South Elmhurst and Richmond Hill as City Council Member from 2002 to 2009. Prior to being elected to the Council, Melinda served as Director of Community Boards for Queens Borough President Claire Shulman.
Melinda also represented Forest Hills, Rego Park, Middle Village and Glendale in the State Assembly from 1994 to 1999.

In addition to her career, Melinda is the proud mom of two sons, Carter and Hunter -both conceived in vitro. She and partner Curtis Sliwa are in fact, separated since 2014. The couple split bitterly, with Katz, changing the locks back then. 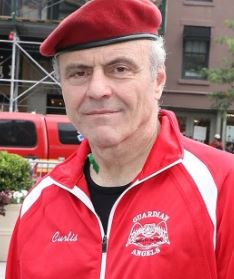 Sliwa is a well known media personality, having had his own radio show. Sliwa, an activist is also known as the founder of Guardian Angels in 1979. Curtis a then McDonald’s night manager, decided to fight crime and taking on a distinctive uniform of a white t-shirt and red beret, the Guardian Angels were born -which is now one of the world’s largest grassroots organizations.
The 65-year-old often speaks before corporate teams, media professionals, senior executives, non-profit associations and educators. His work has been recognized by Presidents Nixon, Reagan, Clinton and Bush.

He was previously married to Lisa Evers from 1981 until 1995. He married a second time in 2000 to Mary Sliwa but the two finalized their divorce in 2012. In 2014, Sliwa’s second ex-wife, Mary took him to court over support payments.
She accused Sliwa of carrying on a torrid extramarital affair with Katz while only pretending to have fathered their two sons chastely, through in-vitro fertilization.
He and Mary share one son, Anthony Chester. Last year he tied the knot to current wife, Nancy Regula.