Mary Podesta is the lovely long time wife John Podesta who’s known as the former Hillary Clinton campaign Chairman. Mr Podesta is a long-term associate of the Clintons and was President Bill Clinton’s Chief of Staff from 1998 until 2001.

He graduated from Georgetown University Law center in 1976 before working as a trial attorney for the Department of Justice.

Mr Podesta also owns the Podesta Group with his brother Tony, a major lobbying firm and is the Chair of the Center for American Progress (CAP).

According to his LinkedIn, he is also a Visiting Professor at Georgetown University Law Center.

Podesta has held numerous positions in politics  including counselor to President Obama, Chief of Staff to President Clinton, Founder of the Center for American Progress.

Prior to founding the Center in 2003, he served as White House chief of staff to President Bill Clinton. He also recently served on the President’s Global Development Council and the UN Secretary General’s High-Level Panel of Eminent Persons on the Post-2015 Development Agenda.

He wrote the 2008 book ‘The Power of Progress: How America’s Progressives Can (Once Again) Save Our Economy, Our Climate, and Our Country.’

Additionally, Podesta has held numerous positions on Capitol Hill, including counselor to Democratic Leader Sen. Thomas A. Daschle (1995-1996). A Chicago native, Podesta is a graduate of Knox College and the Georgetown University Law Center, where he is currently a visiting professor of law.

He describes himself as a proud husband, father, progressive, runner, chef. 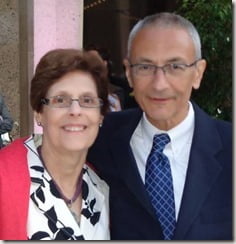 Mary S. Podesta is the Washington, D.C. attorney married to him for nearly four decades.

Accoridng to her LinkedIn, Mary Podesta is a mutual fund lawyer. She attended Middlesex High School in New Jersey.

Mary Podesta went on to graduated *** Laude with a BA in American studies from Smith College in 1966. She gained her Juris Doctor in 1976 from Georgetown University Law Center.

She was an Associate Director and Chief Counsel for 13 years at SEC Division of Investment Management in the Washington D.C. Metro Area.

From 1994 – 2012 she was a senior counsel at Investment Company Institute.

She definitely has had more of a low profile than her hubby. Her 67-year-old husband is currently making headlines after slamming the FBI over Russian hacking.