Litsa Menounos is the lovely and very proud mother of TV host and actress Maria Menounos. The mother-daughter duo is currently not on their best moment.

Both Litsa Menounos and her husband, Constantinos Menounos come from Greek heritage. The couple welcomed their only daughter Maria, in Medford, Massachusetts on June 8, 1978. Their daughter became Miss Massachusetts Teen USA in 1996. Litsa and Constantinos are also the parents of Maria’s younger brother, Peter.

Litsa’s daughter graduated from Emerson College and is now well known for her hosting gigs at E!News, Access Hollywood, Today, and Extra. She’s also done film, radio and has even made several appearances on WWE.

As for her daughter’s love life, Maria has been in a relationship with broadcast writer, Kaven Undergaro for two decades and are currently engaged. 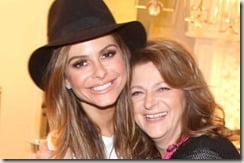 Litsa Menounos is listed as a former cook but has also had her own time on camera. According to IMDB, Litsa has appeared on Chasing Maria Menounos (2014), Operation Shock and Awe… some (2008) and Adventures of Serial Buddies (2011).

Chasing Maria Menounos was a reality show about Maria’s life. Litsa appeared as herself for 10 episodes.

The wife and mother of one has kept active on social media and has a Twitter account in which she happily announces she loves cooking, her family and her dog.

Litsa not only loves cooking, according to her bio on Oxygen, she she was responsible for serving two thousand meals twice a day to students. 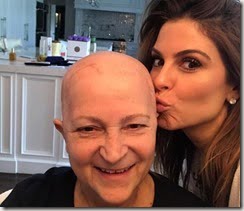 Litsa Menounos’ health problems began last August after she was diagnosed with brain cancer. Her daughter wrote on Instagram at the time her mother was “a champion” for how she endured treatments, and noting, “And so our journey begins. Please pray for her full recovery.” Despite her unimaginable pain, she kept the faith, hashtagging “#choosehappiness” and “#wewillfight.”

We wish this fabulous mother-daughter duo all the best.