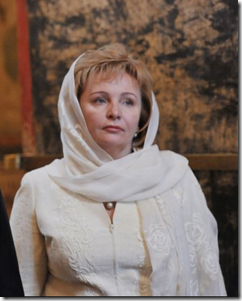 What seemed even more bizarre or maybe not so much is the couple, planned or not, gave the news on state T.V almost with a sense of freedom; as if their split is the happiest news they’ve had in a long time! Well after 30 years, almost nine of those in the public eye, with her husband’s first two terms; it must feel like a ton of weight off your back huh!

The Putins married on July 28, 1983, and have two daughters, Maria born 1985 and Yekaterina born 1986, whose lives get little public view. The couple seemed to have their differences, while Putin seeks the spotlight she is more of a private person and does not like the publicity. She was even rarely seen in public during her husbands long tenure.

The current first lady of Russia was born Lyudmila Aleksandrovna Putina on January 6, 1958 in Kaliningrad, Soviet Union. She attended Leningrad State University graduating in 1986 from the Branch of Spanish language and philology where she also taught German until 1994. She is a former Aeroflot flight attendant. While her husband served as a highly profiled Russian politician she became in charge of a fund with the objective to developed the Russian language. Her little involvement in the public eye was confined to only giving statements about the maintaining and preserving of the Russian Language. Apparently Putina and her daughters have followed Russian tradition on maintaining a low profile on the political stage except when is required by protocol. They are so private not even a family portrait was ever exposed!

For some the news does not come as a  shock at all since the couple have struggled with cheating on Vladimir’s side for years! But it seems she tried to get his attention when she complained during an interview back in 2005 saying:

“one needs not only to work, but also to live.”

Referring to her husband’s long hours of work.  But it all indicates an amicable divorce between them, saying “our common decision”.