Lux Wright is the gorgeous girlfriend and soon-to-be wife of stunt and TV performer, Stephen Gilchrist Glover whom you may know best as Steve-O –widely known for being an original member of MTV’s Jackass.

Lux’s beau most recently made headlines last month, after reports surfaced that 46-year-old Steve-O, had been hospitalized just two days into filming ‘Jackass 4.’

It’s been two decades after the series first launched, and the crew has reunited to start production on the fourth film. But, will they make it out without a scratch? It just wouldn’t be true Jackass fashion.
News of a new Jackass film was confirmed in late 2019, revealing the release date was set for March of 2021.

While we are familiar with Steve, or at least most of us are; little is known about his current better half. Let’s get to know more about the lovely Lux Wright.

Steve-O girlfriend, Lux Wright has been in a relationship with the entertainer since 2017. The two have been engaged since 2018. He popped the question on stage during the end of a comedy special he was filming in Denver with his Jackass co-star.

Lux certainly knows how crazy her fiancée can get; last year Steve-O; known for dangerous and painful stunts, suffered serious burns during a stunt and had to receive surgery. Lux Wright was right by his side during his painful recovery. She’s definitely a keeper!

Steve-O is also pretty affectionate on social media and often posts images of the couple in intimate situations, leaving very little to the imagination.

For her birthday he wrote on his IG account:

Happy Birthday to my wonderful @luxalot! I’m so grateful to have a life partner who can put up with me, keep up with me, enjoys taking crazy photos and watching @ufc fights as much as me. There’s so much more I love about this woman, she couldn’t be more perfect for me…

How old is Lux Wright?

Lux Wright is in her early 30’s. She is her boyfriend’s junior by over a decade. According to publications she is currently 32.

What does Lux Wright do?

The lovely Lux Wright might not be as famous as her man, but she’s definitely getting there. Steve-O girlfriend, Lux seems successful at her own thing. She is a photographer, stylist and visual artist with a decent following on social media. According to her LinkedIn, the pretty lady is a Sales Associate at Nest Studio Rentals –where she has been working since February 2014. Prior to that she was an event coordinator at RockSugar Pan Asian Kitchen, a Stylist Intern at Chic Little Devil and a sales associate at D&G.

She holds an Associate of Arts, Visual Communications from the Fashion Institute of Design & Merchandising (FIDM) –which she attended from 2005 until 2007.
She writes on her social media bio ‘Stylist / Designer – Film, Commercials & Stills’

Steve-O girlfriend, Lux Wright has over 270k followers on Instagram.

Steve-O has actually been married twice before. However, he isn’t currently married. He and girlfriend Lux Wright are planning to get married but no date has been set. To be married, Steve-O girlfriend, Lux, would become his third wife.

He married Candy-Jane tucker in 2002, however the union didn’t last with the pair splitting in 2003.
Three years later he married Brittany McGraw, the couple split two years later in 2008.

Candy-Jane Tucker became Steve-O’s first wife in 2002. According to online sources, the two had met quite sometime before Steve’s big break.

During her married life with Steve, Candy appeared as herself, in High Chaparelle, a TV series documentary. Not much more is known about Candy -who has stayed under the radar, after her and Steve-O’s divorce in 2003.

During his time together with Candy, Steve-O was addicted to drugs and alcohol. Speaking about this dark time, he revealed that his addiction is was what cost him his marriage.
He was in such a bad shape that he had started hearing voices in his head and suffered from psychosis.

Brittany Mcgraw became Steve-O’s second wife, but this relationship too did not last long, and by 2008, he was a two time divorcee.
The blonde appeared next to her man in a few public events but kept a low profile for most of their time together.

While the exact reason for their split has been kept under the curtain, speculations have been made. It is believed that due to lack of time they spent together the ex’s simply grew appart.

After his divorce from Brittany Mcgraw, Steve-O was romantically linked to Stacey Solomon and tattoo artist, Kat Von D.

Born in London on June 13, 1974; Steve-O, real name Stephen Gilchrist Glover had a diverse upbringing having lived in numerous countries including, Brazil, Canada, Venezuela, London and later the U.S.

The son of an American father and a Canadian mother, Steve-O attended the American School in London and dropped out of college until he found his true calling graduating from the Ringling Brothers and Barnum & Bailey Clown College in 1997.

Steve-O was brought on by director of Jackass, Jeff Tremaine; after he saw his potential in the stunt tapes he send to Big Brother.
Jackass was so successful that it spawned several spin-offs and sequels almost immediately. The series was quickly made into a film, Jackass: The Movie. Steve-O joined the cast, and the film grossed almost $80 million worldwide on a $5 million budget. The sequel, Jackass Number Two grossed almost $85 million on an $11.5 million budget. The third and final Jackass movie, Jackass 3D, grossed almost $172 million worldwide on a $20 million budget.
Additional Jackass movie spinoffs, such as Jackass Presents: Bad Grandpa, Jackass 2.5, and Jackass 3.5 were also released.

Following the success of Jackass, it led Steve-O and the other cast members to several films and its spin-off series Wildboyz. Outside of the film world, Steve-O has also found success in music and stand-up comedy. He has also appeared in various video games. Steve-O is known for doing daring, disgusting, and sometimes morally questionable stunts and pranks.
The British-American comedian, stuntman, and TV personality is estimated to have a net worth of $2.5 million.

His path to success however, hasn’t been easy. Due to his drug and alcohol abuse, he was arrested several times and it got so bad that by 2008 he was held at a hospital for 14 days because of his suicidal behavior.
Steve-O would later state that his drug use caused considerable mental health problems.

By 2010, he was back on track and went on tour as a stand-up comedian. In 2016, he released his first comedy special. In addition, Steve-O has a YouTube channel with over 5 million subscribers. He also released an autobiography called Professional Idiot: A Memoir.
In March 2018, Steve-O marked 10 years of sobriety with a social media post featuring a disturbing photo of him mid-drug binge.

Steve-O managed to get sober with the help of close friends, that includes Jackass co-star, Johnny Knoxville. 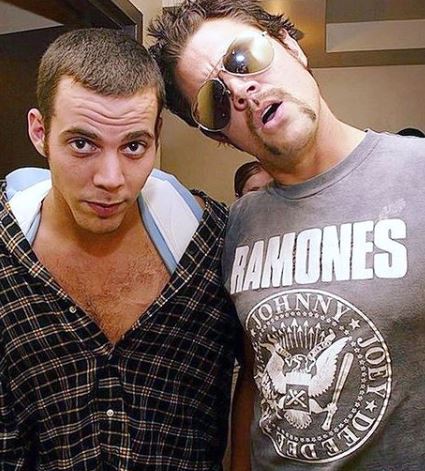 During an interview, Knoxville spoke about Steve-O’s downward spiral, saying

“We’d all had our eye on Steve-O because he’d gotten to a really bad point in doing all kinds of crazy drugs,” “But when his e-mails kind of hinted at suicide, I got 10 of our closest friends — big guys– and went to his house and said, ‘Steve-O, you know, we’re here to take you into the rehab, or actually 5150 medical hold,’ and he goes, ‘No dude, I ain’t going.’”

Steve-O himself publicly thanked Knoxville writing on a post

“I just can’t put into words how grateful I am for [Jackass host] @realjknoxville and the rest of the guys who locked me up in a psychiatric ward on March 9, 2008, where this journey began.”

In another interview, Knoxville said the two have been friends since the late 1990s.

What happened to Steve-O voice?

Lux’s boyfriend is widely associated to insane and frightening antics. Steve-O was always a standout in the group because of his distinctive voice.

But, is there a reason for his voice to have such a raspy pitch…His tone is a reflection of his turbulent past.
He’s said during interviews that he ended up damaging his esophagus

I have Barrett’s Esophagus, it’s a pre-cancerous condition in my throat/esophagus for which I blame all of my vomiting, drug abuse, and generally shitty living in years past.

Steve-O’s has not only put his body through dangerous stunts, he has also collected numerous and bizarre tattoos.
Some of his most notable ink works include a self-portrait back piece, three separate ***** designs, the silhouette of an obese pin-up, a replica of Angelina Jolie’s “Billy Bob” tattoo, the word “Your Name” on his ***, and a very controversial Blood and Crips piece.