Sarah’s husband is well known as the lead singer of the Grammy-nominated rock band Panic! at the Disco.

The couple has been together for several years and seem to be going strong. Find out more about the lovely celebrity spouse, Sarah Orzechowski.

Urie grabbed headlines when he came out as pansexual in 2018. However, the 32-year-old has been happily married to the lovely Sarah Orzechowski. 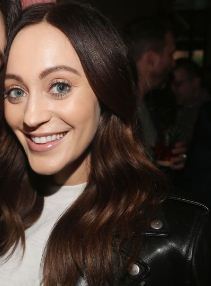 Sarah Orzechowski was born February 23, 1987; the Michigan native later moved to Los Angeles. She has a brother named Steve.

Brendon Urie wife, Sarah Orzechowski has remained loyal to her famous hubby who has been under fire more than once.
In 2020, he grabbed headlines after he was accused of problematic behavior from former Panic! At The Disco bassist Dallon Weekes, who after he left the band in 2017, has said he was conctantly bullied. Dallon’s wife Breezy Weekes, also accused the band’s bodyguard Zack Hall of sexual harassment.

Some of Urie’s alleged past offenses have included “I wish I was Black” speech and multiple “****-shaming” videos. There’s been also videos, interviews, and tweets by Urie himself that allude to transphobia, ableism, rape, racial slurs, and more.
Sarah’s flamboyant and talented musician husband hasn’t been active on social media since last summer.

The couple has been husband and wife since April 27, 2013; and are still currently a couple.
That means Sarah Orzechowski and Brendon Urie, have been married for the past eight years. 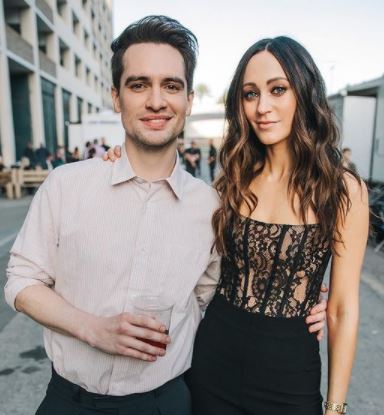 Despite the fact they have been married for a while, the couple does not have any children together. Speaking about the matter Brendon said during a 2018 interview

“In terms of having kids… No, I have no want right now. But maybe that will come in time? There was a time when I was telling myself, ‘Oh, I’ll never get married’ so I can’t really speak in definitive because that is dangerous. But I’m not really thinking about it right now. I have friends in Alcoholics Anonymous who talk to me about not living life too much in the future because you forget to enjoy the present. I don’t even know how long we’ll stay in this house for or if it will be forever, but I’m enjoying myself so much right now I just want to focus on that.”

Though there are no children in the picture, Sarah is a proud dog mom, their dogs are named Penny and Bogart.

How long have Brendon and Sarah been together?

Sarah Orzechowski who now goes by Sarah Urie was in a long-term relationship with the singer with the couple getting engaged in 2011. 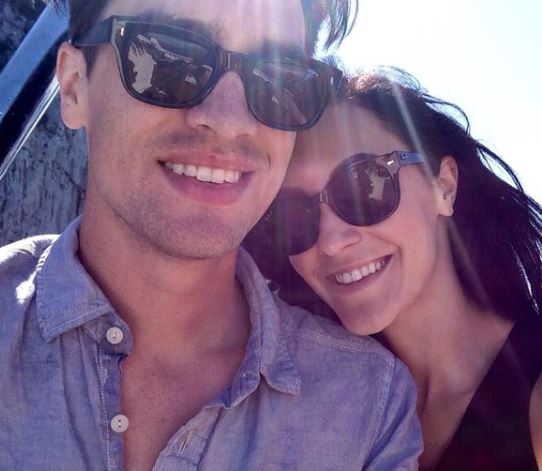 When the two first met, Sarah was actually in another relationship.
Story goes that months later, Sarah who is friends with Hayley Williams from Paramore; was reintroduced to Urie in one of his shows. This time she was single.

To try to impress her, Urie wrote the song ‘Sarah Smiles’ –he played it for her and the two began dating. 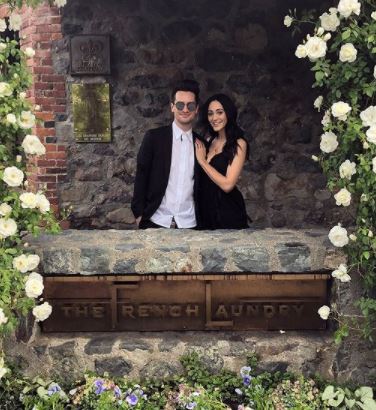 Their big day took place at Saddlerock Ranch and featured lots of floral details. They also shared a quote from Sarah about the couple’s special day; she said:

“It was very important for us to have this day reflect our love for one another, something beautiful, romantic, whimsical, and unique. Every detail really came together the day of and we became very emotional when we finally got to see it all at once. We were honestly speechless at how beautiful everything was – it truly felt like a real life fairy tale.”

In 2015, a couple of years after their nuptials, Brendon revealed to Entertainment Tonight that Sarah was a big inspiration for Panic! At the Disco’s album Death of a Bachelor. He told the publication

“I never thought I was able to let go of the past. Just everywhere from touring to personal life. I mean, there’s so many things that are involved, it’s just been a smorgasbord of craziness for 10 years… and that was really talking about me as a single guy — and now I’m married,” adding “It’s just really cool to look back and be like, ‘wow, that’s so weird. I never thought I’d be where I’m at today. it’s kind of a throwback to it.”

What does Sarah Urie do?

Sarah Orzechowski has become quite the influencer and social media star, since she began dating Urie –she has earned over 700k followers on Instagram.
Neither Sarah nor Brendon are particularly active on their respective social media platforms. 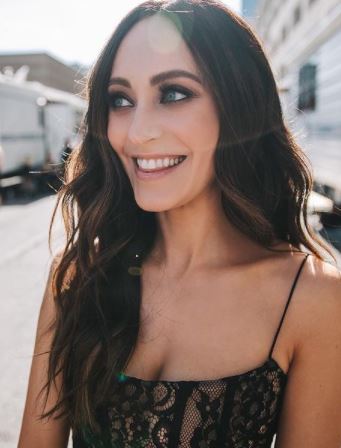 Sarah who describes herself as a skin-care enthusiast and often shows off beauty products on her Instagram account; is also active on Snapchat and Twitter.
The dark haired beauty also happens to be an esthetician and makeup artist.

In her Twitter bio, two of the labels she gives to describe herself are “esthetician. skincare enthusiast.”

According to a LinkedIn, with her name on it, Sarah Orzechowski studied esthetics and makeup artistry at the Michigan College of Beauty-Troy. She worked for MAC cosmetics in the past, and is now self-employed.

No wonder every time she is photographed in public or featured on social media, her makeup is always on point! Accentuating her natural beauty and flawless skin.

The Utah native born in 1987 was raised by parents Grace and Boyd Urie in Las Vegas –along with five older siblings. Brendon was picked on in high school for being hyperactive and worked at a smoothie shop in order to pay for practice space.

He’s been active in the music world since the early 2000’s. Brendon plays bass, organ, accordion, and cello, among other instruments.

Urie formed Panic! At the Disco in Las Vegas, Nevada in 2004. The band’s debut album A Fever You Can’t Sweat Out was released in 2005 and went Platinum in the US, UK, and Australia.
Their album Pretty. Odd. Reached #1 in Australia and #2 in the United States, Canada, and the United Kingdom. The band released a total of four studio albums before their split in 2015. In 2015, Urie became the sole remaining member of the band.

Urie has also worked with artists Fall Out Boy, The Cab, Travie McCoy, Twenty One Pilots, and Nate Ruess.
According to online sources, he has an estimated net worth of approximately $8 million dollars.

According to a review on his vocal range, Brendon Urie is a stunning technical singer that has trained his instrument avidly and has been considered by many as having one of the best voices in the industry.

He is mostly known for his widely expansive vocal range which spans four octaves (a rare feature for a man). The huge control over his voice, along with superb breath support and outstanding sense of musicality mean that anything Urie does with his voice, he always sound comfortable doing it.

Back in 2019, Sarah’s artist husband emerged as a Twitch gamer. He began hosting pretty much daily livestreams on his Twitch channel, engaging with Panic! fans, plays Fortnite, answers questions, and basically just enjoyed a very nice time.
He additionally dropped a few details about what’s going on in the world of Panic! At The Disco.

He also participated on a charity Twitch stream in partnership with State Farm to benefit the Highest Hopes Foundation, which aims to lead, develop and advocate support for human rights.

Last year however, he faced backlas for some comments he made on his Twitch stream. The 33-year old Panic! At The Disco singer was accused of being racist.

Urie made comments containing the phrase “ratchet a… Puerto Rican names” as well as some other comments billed as racist.

Urie has been known for his quotes, here some of them:

“Music is always a healer. Music has never let me down. I know it’s my religion. There’s the idea that you can’t truly know happiness until you know sadness, so how can you heal yourself unless you’ve hurt yourself? I’m still figuring out who I am, but I know that I’m not who I was.”

“I don’t have any pets, so I get to walk around the house naked. So I’m more free.”

“I like surprising myself. I don’t want to do the norm, do what I’m always known to do, write how I like to write.”

“Heartbreak is the best motivation.”

“We’re just like you. Were not these older idols, you know, were just kids like you guys.”

“It’s cool to be different and just be who you are and shock people in a good way.”

Urie has many tattoos, during an interview he reveled he got his first ink work at 19, which he had planned to get since he has 10. 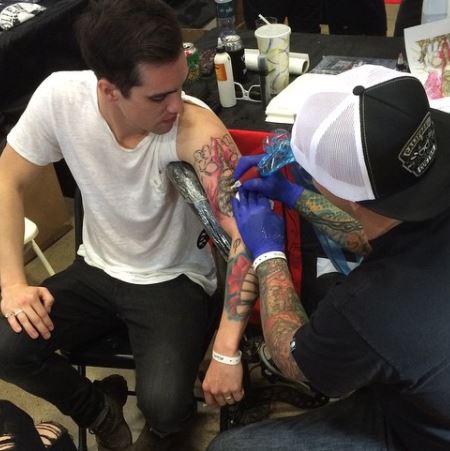 At age ten, he drew piano keys coming out of an arm, as an indication that music is everything to him and which would later become his first tattoo.
Some other of his tattoos include flowers and a picture of Frank Sinatra. 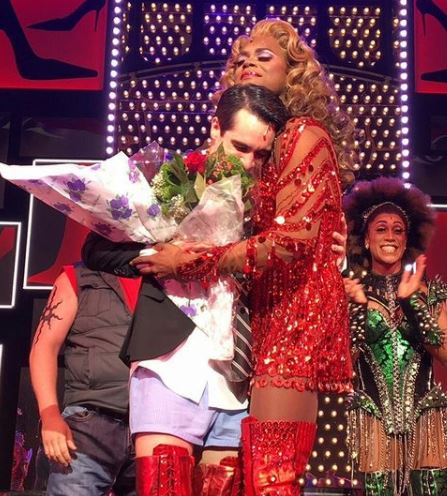 It seems that Urie has done it all! In 2017, the Disco front-man made his Broadway debut as Charlie Price in Kinky Boots.