Nicole Hocking is the lovely girlfriend of country music singer and songwriter star, Luke Combs. They have been engaged since 2018.

Upon his arrival in Nashville, he started covering country songs and posting them to YouTube. His first original single “Hurricane” was released in April 2015. In November 2016, “Hurricane” entered the Country Airplay charts, reaching number one in early 2017. Its success set the stage for Combs’ full-length debut, This One’s for You, which debuted at number one on Billboard’s Country Albums. Since then, he’s delighted us with “When It Rains It Pours” and “One Number Away,” his second and third number one singles; along with the ballad “Beautiful Crazy.”

In early 2017, the singer/songwriter was named one of Sounds Like Nashville’s “Artist to Watch.” He received a Grammy Nomination for Best New Artist in 2019. 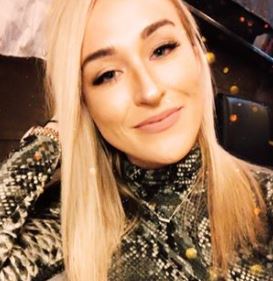 In addition to his newfound fame and sucess, the 29-year-old singer has also found a lady love.

Nicole Hocking is a native of Florida but is currently living in Nashville with Combs. The pretty blonde is devoted to her beau as she revelas on her social media ‘traveling the world with my love’
Nicole who is engaged to Combs, has been in a relationship with him since at least 2016. Nicole Hocking was born July 21, 1992; the native of Fort Myers, Fla., is a graduate of Florida Gulf Coast University.
The pretty blonde is quite the social media star. She usually posts travel and lifestyle photos to her nicohocking Instagram account. She has amassed over 290k followers on her Instagram.

She worked for a while as staff at Broadcast Music Inc. According to a profile she served as a Recruiting Onboarding Coordinator at BMI. She made headlines last month for defending her man after Twitter users criticized her for dating a bigger man.