Natalia Grace Barnett who hails from Ukraine, has been accused by her adoptive parents of being sociopath and wanting to kill them.

Natalia who has dwarfism, appeared on Dr. Phil saying she is only 16 and denied being evil and wanting to kill her adoptive parents, Kristine and Michael Barnett.
Natalia Grace Barnett explained on the TV show that she was only 6-years-old when she came to the US. Around the same age she was adopted by the Barnetts’
She then insisted she was still only 8 when the Burnetts left her alone in an apartment in Lafayette. 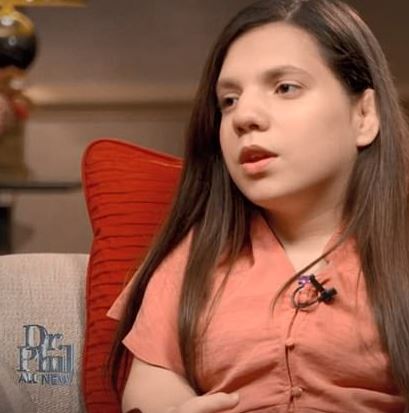 Kristine and Michael Barnett claim she was really an adult when they adopted her in 2010. The couple say they discovered her supposed scam after seeing pubic hair on the girl who also had menstrual cycles. They also added Natalia attempted to poison them and would stand in their bedroom holding a knife as they slept. Kristine Barnett is a famed parenting author and motivational speaker.
The Barnetts who are now divorced, even obtained court judge’s approval to change Natalia’s age from eight to 22 back in 2012. Records that showed Natalia being born in 2003 were change to 1989 -which would make her 30-years-old in present day.
Michael Barnett told Dr. Oz -one of the benefits of changing her age was so that she could be lawfully admitted to a psychiatric hospital to get the care she needed. The Barnetts also said they didn’t abandoned her, saying they set her up in an apartment, paid her first three months’ rent; set her up with disability, social security and food stamps.

However during her apparition on Dr. Phill -Natalia said that she has never had a period. This was backed up by the woman currently caring for her, Cynthia Mans.
As part of her story, Natalia revealed she lived with several families after first landing here from Ukraine. Prior to being adopted by the Barnett and moving to Indiana with them, she lived for some time in New York.

As for her former parents, Michael and Kristine -they have been accused of abandoning their eight-year-old daughter in Lafayette, when they moved with their three biological children to Canada. They have since been arrested and charged on two counts of felony child neglect. Both posted bail and are awaiting their trial in January 2020.