Luka Sabbat and Kendall Jenner have been hanging out dangerously together for a few days now, but who is the guy and more importantly are they dating?

The two models are staying at the Hotel du Cap-Eden-Roc and were seen relaxing in France during the Cannes Film Festival. They were photographed again over the weekend while jet skiing together under that French Riviera sun.

Is not yet clear if Luke and Kendall are a couple, until recently he was romantically linked to Kendal’s sister Kourtney Kardashian.  Check out more interesting data about Luka below. 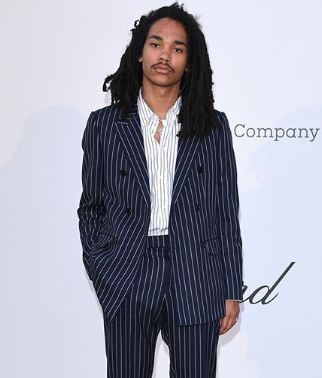 #1 He was born into a fashion family

Luka was born November 26, 1997; the New York native grew up between NYC and Paris since the age of 3. His mother, Jessica Romer was a fashion stylist and is now a chef. His father, Clacrk Sabbat is a fashion designer and his grandmother was an interior decorator.

According to  his website, Luka ‘hated the camera and fashion growing up’ and admits to end up working as a model is ‘ironic’

#3 He doesn’t label himself

Luka doesn’t believe in titles so he describes himself as ‘a Creative Entrepreneur exploring all the world has to offer.  Stylist, Creative Director, Design Director, Actor, Model, etc…..’

#4 He made his film debut with Selena Gomez

Luka made his movie debut alongside Selena Gomez in The Dead Don’t Die, which premiered at this year’s Cannes Film Festival.

Prior to his role in The Dead Don’t Die, Sabbat’s most notable acting role to date has been his breakout role on Grown-ish, a spin-off of the show Black-ish.

#6 He may have dated Kourtney Kardashian

Luka was previously rumored to be in a romantic relationship with Kourtney Kardashian, however 40-year-old Kourtney revealed they are just friends.

#7 He has a successful modeling career

Sabbat has appeared on a number of runways around the world—including Kanye West’s Yeezy Season 1 runway back in 2015—and scoring a number of big-name campaigns for Evian, Footlocker, and a slew of other fashion brands.

#8 He is friends with a number of celebrities

Aside from the Kardashian-Jenner’s, Sabbat also counts Bella Hadid amongst his closest friends, frequently appearing on her Instagram feed. If Hadid wasn’t enough Luka is also close to co-star, Chloe Sevigny.

Luka started interning at a store called The Hundreds because of his passion for streetwear and skate culture. He would later go on to co-found the company Hot Mess.

#10 His best friend if Kerwin Frost

Sabbat and the 23-year-old DJ and consultant have been friends for years. They appear on ‘KERWIN FROST TALKS WITH LUKA SABBAT (EPISODE 1)’ in which Sabbat calls him his best friend.