Joe McFarland is a top executive at Lowe’s -who recently apologized for making insensitive comments.

McFarland who serves as Lowe’s executive vice president of stores, apologized for an in-house company video in which he described a compact power drill as “perfect” for Hispanic customers with small hands.
He is heard saying “Some of our Hispanic pros with smaller hands, this is perfect for them.” He said his comment was “careless and ignorant.” 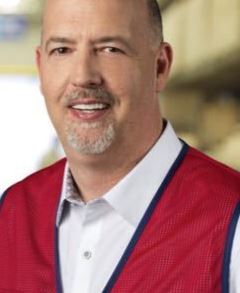 According to his profile, Joe full name, Joseph Michael Mcfarland was appointed Executive Vice President at Lowe’s- Stores in August of 2018.
Right out of high school, Joe joined the Marine and according to an article on Task & Purpose, he never attended college.
Joe spent six years in the Marine Corps as an aviation mechanic. When he left the military in August 1993, he knew that his technical skills were not relevant: “No one was looking for someone to fire a .50-cal out of a door. My technical skills weren’t as important as my people skills.”

McFarland, who spent nine months as an aerial door gunner in Saudi Arabia for Operation Desert Shield, explains what skills are important for transitioning veterans, and what veterans should consider when looking for that first job.

Joe who also worked at JCPenney, spent 22 years at The Home Depot, where he served as president of the northern and western divisions from 2007 to 2015. In these roles, McFarland led the largest sales volume division in the company, producing$36 billionin annual revenue and record profits. Prior to that, McFarland served as regional vice president, NY metro region, from 2005 to 2007, where he managed all aspects of store operations and merchandising and led the region to two consecutive years as the top performing region in the company.

Joe who is active on Twitter reveals on the social media platform, he is also a married man and a proud father to five children, he also adds ‘Chief to 2’