Tyler Cameron has been seen dangeroulsy close to the super model these days and rumor has it that they are starting to get serious.

According to reports Tyler and Gigi Hadid have been dating roufghly for about a month and they made their first public event together at the MTV VMAs -as Hadid took him as her date. The reality TV star spent time with the supermodel’s friends, including Taylor Swift, and her sister Bella Hadid.
The two began dating in August and have been in close proxomity since then. Hadid ended her long-term relationship with Zayn Malik earlier this year and she has apparently moved on.

Tyler Cameron who is also a model is no stranger to the camera. Tyler was born January 31, 1993; to parents Jeff and Andrea Cameron.
The Jupiter, FL native attended Wake Forest and later Atlantic University where he earned his MBA. He was actually drafted by the Baltimore Ravens but had to leave football because of a bad shoulder injury. 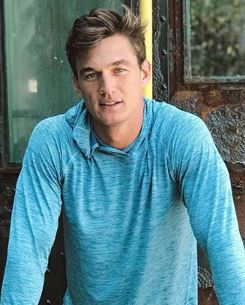 He then started his career as a custom home builder. He then started sharing modeling shots through his Instagram.
Last May he made his debut on The Bachelorette, on Hannah Brown’s season. Though he didn’t win his season of The Bachelorette, Tayler and Brown began dating after the show wrapped up.
In addition, Tyler is also known for his modeling work, having earned representation from Soul Artist Management and Next Models in Miami. According to his ABC bio, where he is listed as a general contractor -he loves to dance and also does scuba diving.
Tyler and Gigi actually have a few mutual friends in the modeling industry, but met on Instagram -according to ELLE.

The two met for drinks in early August, just days after he was seen leaving Brown’s apartment. The two have been on a few dates and just like he did with Brown he was seen leaving Gigi’s place the day after. Though is not clear if they are an item or not, one thing is for sure; Brown and Tyler are both single, so Tyler is free to date and have fun.

Tyler who has over 2 million followers on social media, often posts about his rescue dog, Harley.