Meet Elaine Chappelle, the last name says it all, she is the lovely wife of comedic legend, Dave Chappelle -of the Chappelle’s Show.

Elaine’s husband is well-known for his impersonation of Rick James from a famous sketch on his TV show and, at one point, the first season DVD set of the show was the best-selling TV series of all time.
The Washington, DC native moved to NY in pursuit of a career, he had his first performance during Amateur Night at Apollo Theater at 19. He later made his film debut a s “Ahchoo” in Mel Brooks’ Robin Hood: Men in Tights in 1993.

From 2003 until 2006, he fronted the Chappelle Show, a popular sketch comedy show which ran on Comedy Central.
There’s no need for an intro for Chappelle who has been in the limelight for years. His wife of several years however, is virtually unknown.
The entertainer infamously walked away from a $50 million dollar contract during production of the third season of the series and its said that his wife Elaine had to do with his decision to turned it down.
Elaine Chappelle was her husband’s main support system during the breakup with Comedy Central regarding Chapelle’s Show. Despite his super star status, Chappelle has turned out to be quite the family man. 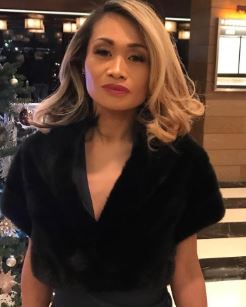 Elaine Chappelle was born Elaine Mendoza Erfe on August 31, 1974; the native New Yorker was born to Philippine parents. Growing up she intended to become a chef but now is a proud housewife and mother.
She and Dave became husband and wife in 2001. Elaine who has been married to Chappelle for nearly two decades is super private and keeps a low profile despite being married to such a prominent figure.
Is safe to say she is her husband’s biggest fan, the two have walked numerous red carpets together and their family life has even provided the comedian with juicy material for his funny specials.
Since their nuptials, the two have welcomed three children together, sons Sulayman and Ibrahim and a daugther, Sonal.

Elaine and her family live on a farm located in Ohio -that stretches approximately 65 acres.