Larossi Abballa has been identified has the ISIS follower who live streamed the killing of a police officer and his wife at their home in the Paris suburb of Magnanville. He killed the couple using a knife in front on their three-year-old son.

Abballa –who worked as a restaurant delivery man –posted gruesome images of the murdered couple on the internet. A 12-minute video and 15 photographs appeared on Abballa’s Facebook page, along with his explanation for what he had done.

In the video, Abballa not only expresses his allegiance to ISIS and its leader, Abu Bakr al-Baghdadi, but also sends a message to French president saying:

‘(President) Hollande you are ruthless but we are also heartless…I was ruthless just now towards this policeman and his wife.’

After a three-hour stand-off elite Raid commandos entered the building, where they killed Abballa.

Larossi Abballa made sure his plans were known. He actively posted on his now suspended Facebook account. One of his most recent Facebook posts was a mock-up of the European Championship logo, which he claimed contained masonic and occult symbols. 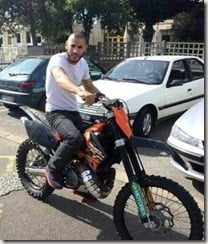 According to French security experts, Larossi Abballa was already in the radar of authorities. He had been part of a recent investigation into a Syrian jihadist network.

The Mantes-la-Jolie native also had criminal convictions for theft and violence dating back to 2011. Then as recent as 2013, he was sentenced for taking part in a jihadist organisation with links to Pakistan. Despite his clear connection to the Islamic extremist, he managed to spend only a few months in jail.

According to police sources, a list of possible target was found on his computer. At least three others have been arrested with links to Larossi Abballa.