Andrea Frazier is the lovely wife of drug company exec Kenneth Frazier –the 62-year-old who called it quits from President Trump’s manufacturing council.

Her hubby is the Chairman of the board and chief executive officer, Merck & Co., Inc. –position he’s held since 2011. Her long time husband decided to take a stand by resigning from the council following the deadly Unite the Right rally in Charlottesville.

This is not the first time Frazier takes on a moral stand. Forbes noted in his early days working as a Merck lawyer and as the head of the company’s head of public affairs, he defended a man on death row who was eventually released.

He attended Penn State and then Harvard Law School, both on scholarship. Born in 1954, the Pennsylvania native joined the law firm Drinker Biddle & Reath in Philadelphia in 1978.

His biggest task after becoming Merck’s corporate counsel in 1999 –was defending Merck from an onslaught of lawsuits relating to its handling of the painkiller Vioxx. Frazier insisted on fighting case by case, resulting in a total liability of less than $5 billion. 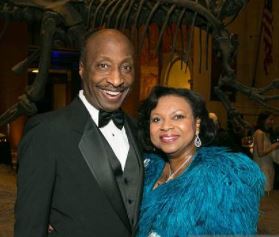 According to her social media, the lovely Mrs. Frazier is a Newtown resident. Andrea Frazier is a New York native who went to Fiorello H. LaGuardia High School of Music & Art and Performing Arts.

She was also a student at the Graduate Center, CUNY in New York and at Tufts University in Medford, Massachusetts.

Andrea and Kenneth Frazier have been married for decades and together are the proud parents of two children: a son James, and a daughter, Lauren.

Her son, James Frazier attended Hun School of Princeton and also Lehigh University. While daughter Lauren Frazier studied Computer Science at University of Pennsylvania and is a former Google Software engineer. Lauren is currently in a relationship with boyfriend, Pierre Jambet.

The wife and mother of two often appears at public events by the arm of her husband. She clearly keeps an active social life and is a big supporter of her hubby.

Find more interesting info on Andrea Frazier in the link below.