Logan Smith is the man behind the site called “Yes, you’re racist” and its aiming is to identify people who attended the “Unite the Right” rally in Charlottesville.

Logan Smith has got a mission, to out racists, and is doing it so through the viral Twitter account @YesYoureRacist.

Mr. Smith is listed as the communications director for Progress NC Action. According to The News Observer, his site has brought upon him death threats.

He recently appeared on TV saying that since publishing photos of torch-carrying white supremacist protesters Saturday in Charlottesville, he has received remarkable support. Smith said the account jumped from 65,000 followers Saturday morning to 307,000 Monday afternoon.

He also said despite the positive support, the threats seem to come from followers of the white supremacist website Stormfront, from neo-Nazis and from alt-right groups.

Smith who in the past only used the account to retweet people making statements he found racists, was moved by the violence in Charlottesville to mark the first time he call out people using photos. 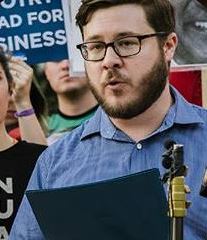 According to an online profile. Logan Smith is a communications professional and digital strategist in Raleigh, NC by way of Tennessee and South Carolina. He describes himself as a Recovering journalist slowly writing a book. Non-political interests include live music, science fiction, cycling, and homebrewing.

According to his LinkedIn, he attended University of South Carolina from 2005 until 2009. He holds a BA, Multimedia Journalism, and Political Science. Prior to Progress North Carolina, he worked as the Digital Director for NC Production Alliance. He was also a Campaign Manager for Nancy McFarlane for Mayor. From 2011 until 2013, he served as the editor at Palmetto Public Record. And was the News Media Producer and Reporter at WIS-TV –for five years.

During his college years he worked at Garnet & Black Magazine and Carolina News.