This gorgeous lady is Katie Hockmeyer, she isn’t only a beautiful blonde; she’s also one of THE names at The Tonight Show, starring Jimmy Fallon.

Katie Hockmeyer is a producer at The Tonight Show, and as such she’s responsible for all elements of production of the show’s creative efforts.

Hockmeyer has been a core member of Fallon’s production team since he first launched his late-night franchise in 2009. Climbing from an associate producer of to a supervising producer.

Katie who attended Villanova University, has worked at NBC’s 30 Rockefeller Center for her entire career.

According to her NBC profile, she won a Producers Guild of America Award in 2015 for Outstanding Producer of Live Entertainment Talk Television. She has also been nominated the last five consecutive years for a Prime Time Emmy Award in the Outstanding Variety Series category. 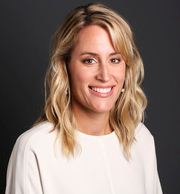 Despite her impressive resume and close relationship to Fallon, reports say, Katie has now left the show. She returned to work after maternity leave but she is no longer part of the show as it was reported that Jimmy’s rating have plummeted.

It wasn’t too long when during an interview, Katie praised Fallon and Executive Producer Lorne Michaels for supporting her career from the start. She told Bustle last summer

“I have never experienced, luckily, what other people have. I’ve had nothing but positive experiences”

“I mean, Jimmy is the definition of a true entertainer. He can sing, he can dance, he’s naturally funny on his feet,” “He has this amazing magnetic energy to be around. It’s contagious. If you’re around him you can’t help but be in a good mood and be happy and just walk away feeling positive. So that’s really what I hope comes across to the audience at home.”

Katie who goes by Katie Hockmeyer Maloney on social media, resides in New York along with her husband and children. She’s been a married lady since 2010.