The man who “intentionally disrupted thousands of commutes” by pulling the subway emergency brake on hundreds of trains over the past few months has been identified as Isaiah Thompson.

The 23-year-old Brooklyn resident has been finally arrested and has been charged with reckless endangerment and criminal trespass for allegedly pulling a subway brake on a northbound 2 train near 14th Street in Manhattan earlier this week.

However, with his record, Thompson could also be the same person who pulled the emergency brake on upwards of 40 trains, resulting in delays on over 700 trains.

In addition to being a serial subway brake yanker, authorities say Isaiah Thompson also exposed himself to passengers and for that he was charged with public lewdness in addition to the previous charges of reckless endangerment and criminal trespass. 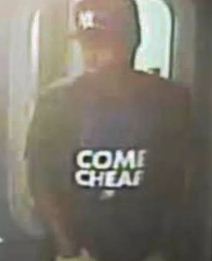 Isaiah Thompson was caught on video last year however police had been unable to caught him. Thompson would proceed to board the rear of the train as it departs a station and unlocked the safety chains. Then somehow got into the rear cab, and triggered the emergency brakes. Officials believe Thompson must have been using a special MTA-issued master key to gain access to the operator cabs, which are otherwise locked.

Finally he would disappear as in one big entertainment act. It is though he most likely used the subway tunnels and out an emergency exit.

An MTA motorman described a run-in with Thompson earlier in May. He told the Post: “I was in between stations and I was operating the train, going at a good speed, all of a sudden the train just completely stops” He realized someone had “unlatched a security chain and had yank the brake lever”

Dressed in all black and wearing black and red sneakers, he was hauled out of a Manhattan police station in cuffs Friday morning. The young man didn’t have much to say. He was arrested at his Bedford-Stuyvesant home.