Stacy Robinson is the late wife of North Carolina based paramedic, Joshua Lee Hunsucker who is said to have been killed by her husband.

32-year-old Stacy Robinson was murdered in September of 2018 and recent reports say her husband of several years, Joshua Lee Hunsucker did it in order to collect insurance money.
It was Stacy’s mom who aleter authuroties of possible insurance fraud by her former son-in-law and an investigation took place. Stacy’s mom told authorities she believed Hunsucker was motivated to kill her daughter after having an affair.
It was then discovered that Hunsucker pocketed a $250k life insurance payout upon his wife’s death. Last week, 35-year-old Joshua Lee Hunsucker was charged with first-degree murder. His bail has been set at $1.5 million.

According to authorities, Hunsucker gave -to whom was once his high school sweetheart Stacy Robinson -a fatal dose of tetrahydrozoline, a decongestant commonly found in eye drops that can cause the heart to stop when ingested. Stacy is said to have stopped breathing, turned blue and collapsed on the sofa of their home. 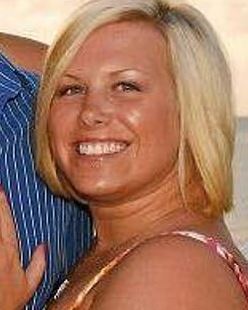 Other red flags for Hunsucker according to updates say he gave differing accounts of what he was doing when his wife died. His co-workers testified that he seemed “unaffected” by his wife’s sudden death. They were also shocked that he had another girlfriend less than six months later. He didn’t allow an autopsy to be performed on his wife’s body. However, Stacy Robinson had been an organ donor. A sample of her blood was preserved after her death and tested by investigators. Results showed high levels tetrahydrozoline. Which meant Hunsucker knew this would cause her heart to stop in a short amount of time even more when his wife had experienced heart problems in the past. Stacy Robinson received a peacemaker in 2015. The late Stacy is survived by the couple’s two young daughters.

Stacy Elizabeth (Robinson) Hunsucker was born May 7, 1986. The late wife and mom, worked as a preschool teacher. According to her obituary, she worked for the preschool at First Baptist Charlotte. She was a former teacher at First Methodist Preschool in Mount Holly.