Leslie’s husband is the Republican legal expert who appeared before the House Judiciary Committee on December 4th as part of the impeachment inquiry into President Donald Trump.
This is not her husband’s first rodeo at an impeachment hearing. Back in 1998 John Turley testified in favor of impeachment in the Clinton case.

Her husband’s credentials also include being the J.B. and Maurice C. Shapiro Professor of Public Interest Law at the George Washington University Law School. The Chicago native is a graduate of the University of Chicago and attained his law degree at Northwestern University’s school of law in 1987. 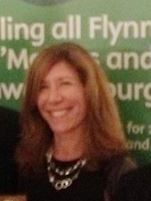 He and wife Leslie have been married for 22 years; in fact, according to a blog post by Jonathan Turley the two eloped in 1997 after eight years of dating. The two became husband and wife on New Year’s Eve in 1997. The appear to always celebrate their anniversary with a bottle of Schramsberg Sparkling wine.

Since their nuptials, Leslie Turley has given birth to the couple’s four children. Is safe to say, Mrs. Turley has been a proud housewife, caring and raising their children while her husband makes a name for himself. Not much more is known about the spouse and mother of four who keeps a low profile despite being married to the important legal scholar.
In 2016, Turley also made healdines after he advocated in favor of polygamy. He argued a case in favor of the stars of TLC’s Sister Wives program. The star of the show, Kody Brown, had been accused of violating Utah’s bigamy laws as he was married to four different women.

Leslie Turley and her husabdn live in Washington D.C. In November 2007, the Washingtonian reported that the couple had purchased a $1.7 million home in McLean’s Chesterbrook Gardens neighborhood.