Jamie Gilt is a Jacksonville, Florida resident who got a heck of a scare after she was shot by her own son. Accoridng to a news release, Jamie Gilt was shot in the back by her four-year-old son! Reports say the small boy found the gun in the back of his mother’s truck.

The unfortunate incident took place when the mother and son, were driving to pick up a horse.

According to Police, Jamie Gilt was driving with her son onboard on Tuesday; when the toddler –who was sitting in the seat behind hers –pulled the trigger.

Jamie Gilt then stopped partially in the travel lanes near the intersection of Rowland Avenue. A deputy who was on patrol stopped and checked on the vehicle.

Jamie Gilt –who had not lost consciousness –was able to signal to the deputy that she needed assistance.

The mother, was rushed to hospital in Gainesville, Florida; while her son was reunited with relatives. Jamie Gilt was said to be in stable condition. Before being transported to the emergency room, the victim told deputies that her son had accidentally shot her. 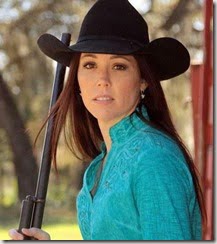 It was determined that Jamie Gilt was the owner of the gun and though she legally owns the .45-caliber pistol, under Florida law, “it a misdemeanor for a person to store or leave, on a premise under his or her control, a loaded firearm in such a manner that it is likely a child can gain access to the firearm.”

The 31-year-old, happens to be a high profile pro-gun activist –that means she believes she has the right to shoot anyone who threatens her. In fact, she has stated in social media that, she loves guns.

Jamie Gilt often posts about firearms on her social media accounts. She has a Facebook page, dedicated to her musings on Second Amendment rights –which has now been deleted.
Jamie had recently bragged about her 4-year-old son, getting “jacked up” “to target shoot with the .22.”

She captioned images of guns, saying: “Got to play with my new toy today” “Time to clean it.”

The young mother, who works as a distributor for Advocare –is also into horseback riding.