Helen’s famous husband is also a rapper and fashion designer who hails from Virginia Beach, Virginia. Born April 5, 1973; Williams is perhaps best known as the drummer and lead vocalist of N.E.R.D a hip hop, funk and rock band which he created with Shay Haley and Chad Hugo. In addition, he and Hugo created The Neptunes, a record producing company that creates R&B, hip hop and soul music.

Williams a Grammy Awards winner, has been in a longtime relationship with wife, Helen. Meet her below. 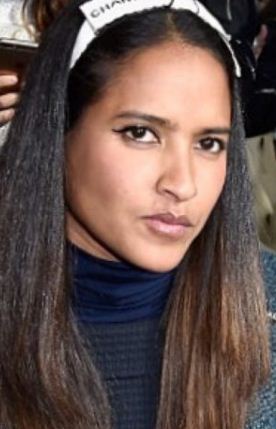 #1 The couple dated for several years prior to their nuptials

Hele and Pharrell had been dating since at least 2008 prior to getting engaged in 2012 and walking down the aisle in 2013.

Thanks to her figure and looks, Helen has been able to do some modeling but she is best known as a fashion icon. She regularly makes Huffington Post best-dressed lists and has garnered some serious love from them, along with other news outlets.

#3 She is the mother of the couple’s four children

Helen and the ‘Happy’ singer are the proud parents of four kids. She gave birth to a baby boy, Rocket Ayer Williams in 2008. The couple welcomed triplets in January 2017.

#5 The two started out as friends

According to an interview, Pharrell revealed when he met Helen, she was in a relationship so she didn’t answered half his texts because she wasn’t interested. The two were friends for two years before they started seeing each other.

#6 She wore plaid at their wedding

The trendsetting bride and groom reportedly wore plaid from head to toe, and many other guests dressed in tartan.

#7 She is not afraid to experiment on the red carpet

The wife and mom of four is always standing out when it comes to her outfits. Like the time when the couple stepped out for the Met Gala in May 2017, Lasichanh rocked a puffy outfit that looked like a giant red cloud.

For the past few years, Lasichanh and Williams have been spotted serving food to the less fortunate at the Los Angeles Mission Christmas Celebration.

#9 She is a former college athlete

Helen Lasichanh was actually one of the best volleyball players at the St. Thomas University in Miami. Volleyball has been her favourite sport to play for the longest time. In fact, Lasichanh has even won a Florida Sun Conference’s Player of the Year award back in 2001.

#10 The woman is super private

Pharrell Williams is almost always accompanied by Helen on major events but she has always shied away from the press. She is ok with letting her husband shine but something tells us she is the boss at home.