Tiaundra Christon is the mother of the 2-year-old girl who was the subject of a daylong search over the weekend.

On October 28th, 21-year-old Tiaundra Kae Christon of College Station, Texas; told police that she had arrived at Gabbard Park with her daughter –Hanzana Anderson –around 8 a.m.

Christon further explained to officers she lost sight of Hazana after going back to her car. She said the toddler was able to get out of the stroller, which was about 30 yards from a body of water.

College Station Police say they found the clothes of missing 2-year-old Hazana Anderson in a dumpster the morning she went missing. Updates on the case say Police found evidence that Christon handled the bag and the object inside. Officers say she denied knowing anything about the object and did not know where her daughter had gone. 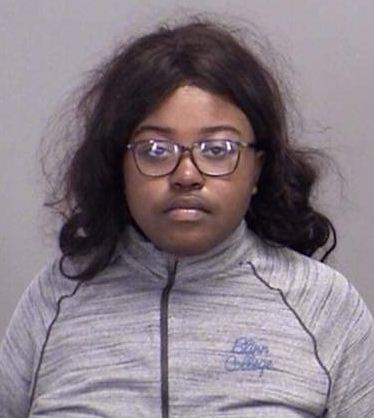 Authorities believing she is lying, decided to arrest her. Tiaundra Christon was arrested on Monday and has been charged with abandoning/endangering a child and making a false report.

On its Facebook page, the police department described Hazana as a black female, approximately 3 feet tall and 28 pounds. She has black hair and brown eyes. The child was last seen wearing an olive green jacket, with a black “girl squad” shirt, cream-colored pants, dark pink shoes and a purple beanie.

Since the missing toddler began making headlines, her father, Tobodrick Anderson went to the media and said he used to be the primary caregiver but that his ex- Tiaundra Christon had been keeping his daughter away from him for the past two months. Since then, he issued a plea to the public for help in locating his daughter.

Christon is said to be in another relationship and police even searched her new boyfriend’s apartment with no luck.

Little two-year-old Hazana is still missing and authorities are still looking for the child. Anyone with information to contact the College Station Police Department at (979) 764-3600.