Albert San Jose is the Filipino priest who sparked drama after riding a Hover Board inside a church during the mass!

The Catholic priest went viral for riding a the popular scooter, during Christmas Eve Mass inside a church in Biñan, Laguna. Following the release of the video, which shows him singing “May the Good Lord Bless and Keep You” to the congregation, he was scolded by the dioceses.

As a result he was suspended. The Diocese of San Pablo did not approve of the priest’s use of a scooter, saying, “That was wrong.”

In a statement, the diocese said:

“The Eucharist demands utmost respect and reverence,” “It is the Memorial of the Lord’s Sacrifice. It is the source and summit of Christian life. It is the Church’s highest form of worship. Consequently, it is not a personal celebration where one can capriciously introduce something to get the attention of the people.”

But not everyone thinks he did wrong. Also in the video, people can be seen applauding his performance at the church in Our Lady of Miraculous Medal Parish in Biñan, south of Manila. 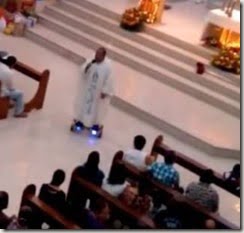 Father Albert San Jose also known as “hoverboard priest”, belongs to the Our Lady of Miraculous Medal Parish. He owned up to his “mistake” and reports say he has since apologized, vowing that “it will not happen again.”

The attention surrounding the footage which shows Albert San Jose gliding while addressing his crowd, had no other choice than to apologized after his suspension.

According to NPR, Albert San Jose has promised not to repeat the performance, saying the rebuke “was a wake up call for him,” according to the diocese’s statement.

Albert San Jose sure has gotten his fare share of critics. Father Jerome Secillano told media outlets, that San Jose “went overboard” by using the scooter during Mass, saying that gimmicks distract from the solemnity of the occasion.

On the other hand, San Jose also has a number of supporters. One of them posting to The Roman Catholic Diocese of San Pablo, Laguna’s Facebook page: “BRING THE PRIEST BACK and I am not even [Catholic].”

Would you agree he really went over the line? Let us know what you think.