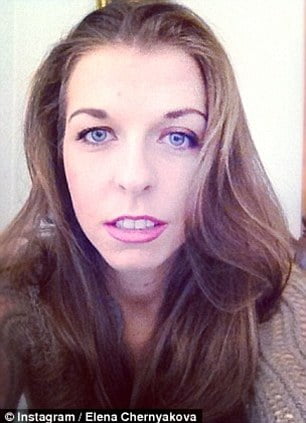 According to aspiring actress and model Elena Chernyakova, on June 13 of this year, she drank to much alcohol and was taken to Northwestern Memorial Hospital in Chicago.

Once she was admitted, she and a friend decided to call a mutual acquaintance, Dr. Vinaya Puppala, who was doing a fellowship with the hospital’s Feinberg School of Medicine.

There is one account that she friended Puppala through a friend on facebook, but had never met in person, but asked for him because her family are all in her native Russia and she was scared.

Another version of this story states that when she arrived at the hospital she was unconscious for about eight hours. It was during this time that Mr Pappala reportedly snapped embarrassing pictures of her and posted them online with humiliating hashtags including ‘Cuvee #bottle #service #gone #bad,’ her lawsuit claims.

Whatever the story is, her pictures were posted on different social medias. “They were embarrasing to me,” she told reporters. “Some friends were concerned about me (and) others were mocking me…People I didn’t even know were contacting me.” She said a security guard asked him to delete the pictures, but the doctor never followed the orders

“A couple of days later, Dr. Puppala still had those pictures on his phone,” Chernyakova said. “He was introducing me as ‘The hospital girl.’” And then she added, “It was time for someone to speak about it.”

Her lawyer, Joel Brodsky, said the suit should indicate “that it’s not okay to post everything and anything on social media.” “The one person you would think wouldn’t do this is a friend who’s a doctor,” Brodsky said.

The hospital has said it launched an investigation into the incident, but claimed Puppala acted entirely on his own.  He currently works for Rush University Medical Center.

There are so many different versions of this story that we can’t be sure what the outcome of the lawsuit will be.