Soraya Love is the girlfriend of Corde Broadus -best known for being the eldest son of star rapper, producer, entrepreneur and actor, Snoop Dogg.

Soraya’s boyfriend was born in Long Beach, California, USA on August 21, 1994; to parents Snoop real name Calvin Cordozar Broadus Jr. and Cordozar Broadus Jr. and high school sweetheart, Shante Taylor.
In addition to having a famous dad, Corde made headlines of his own as an actor. He has gained popularity as an actor and model too.
According to his IMDb, he’s appeared on We the Party (2012) and Snoop Dogg Feat. Pharrell Williams: Drop It Like It’s Hot (2004). 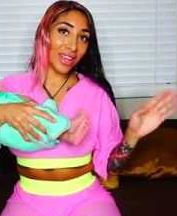 In the love department, he started early. The 25-year-old is already the father of a son named, Zion Kalvin who was born from a previous relationship with former girlfriend, Jessica Kyzer. His son, Zion was born in 2015 -making Snoop a grandfather at only 44.

Is not clear when Corde and Jessica Split, however he’s been in a relationship with current love Soraya Love for a couple of years now. The couple welcomed their firts child together, a baby girl named Eleven Love, in August of 2018. Unfortunately Soraya’s and Corde’s second child is said to have died just 10-days after birht. The couple welcomed a son, Kai Love on September 15, however Corde announced the sad news on social media “Kai Love 9/15/19 – 9/25/19 ///// My Son Kai brought so much love and positivity into this world”

Soraya Love describes herself as a creative artist @sewedbysoraya -which is 100% made from scratch men’s/women’s/kids clothes+accessories.
She also has her own Youtube channel called ‘Spirituality with Soraya Love’ with over 2.29K subscribers and 201,758 views.