Chrishell Stause is the actress wife of hunky actor, Justin Hartley -currently starring on hit TV show, This Is Us.

Chrishell and Hartley tied the knot in 2017, however the good looking couple is said to be heading to divorce ville. According to People, 42-year-old Hartley cited irreconcilable differences as the reason for their divorce, according to documents filed Friday.
The document showed the date of separation to be July of this year.

Hartley and Stause tied the knot in an intimate ceremony at Malibu’s Calamigos Ranch on Oct. 28, 2017 — four years after they met. This was the second marriage for Hartley who was previously married to soap star Lindsay Korman from 2004 to 2012. The couple still has joint physical custody of their daughter Isabella, 15.
Find out more about the stunning and soon-to-be single again, Chrishell Stause. 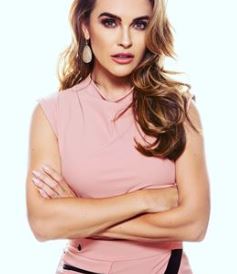 #1 There’s a story behind her name

Born as Terrina Chrishell Stause in the year 1981, American actress Chrishell Stause has an intriguing story behind her name. It is said that Chrishell’s mom went into labor while she was at a Shell gas station. A gentleman named Chris came out to help her and thus the newborn baby girl was named Chrishell. The actress prefers being called Chrishell even though it is her middle name.

Born in Kentucky, she attended Murray State University over there with a degree in Bachelor of Arts, theatre in the year 2003.

#3 She began acting right after graduation

Soon after her graduation, she found herself with a leading role of Amanda Dillon in ‘All My Children’ in the year 2005.

Her hit soap, ‘Ally my Children’ was taken off air in the year 2011. She could be seen doing some guest appearances here and there until in 2013, when she bagged the role of Jordan in the hit TV show, ‘Days of our Lives’. She quit the serial after two years and moved ahead. In 2015, she got a guest role in ABC’s ‘Mistresses’. Soon after, she landed a role in ‘The Young and the Restless’.

Chrishell was initially engaged to Matthew Morrison in the year 2006 but the couple called off the engagement after a few months.

#6 She is also a real state agent

The stunner is a woman of many talents, in addition to her acting, Stauce is also a realtor. Her work as a real state agent can be seen in Selling Sunset, a Netflix reality show focused on The Oppenheim Group.

#7 She is active on social media

Chrishell who describes herself as an actor, realtor, wife and stepmom on social media -keeps her fans updated on her daily endeavors. The gorgeous 38-year-old has over 260k on Instagram.