Kaia Gerber is the new lady in the life of funnyguy and performer, Pete Davidson -of SNL fame.

Kaia and her famous older beau were caught kissing while enjoying a relaxing trip in Miami, Florida. The lovebirds showed off major PDA poolside and beachside.
26-year-old Davidson and 18-year-old Gerber first sparked romance rumors back in October quickly after he split with Margaret Qualley. According to sources, the couple called it quits after dating for over a month.

The stunner needs little introduction as the youngest daughter of supermodel, Cindy Crawford and husband, Rande Gerber. Kaia has an older brother, Presley Walker Gerber born in 1999. Her famous mother was previously married to actor Richard Gere for four years until 1995. Three years later Crawford wedded businessman and model. Rande Gerber. The two have been married since 1998. 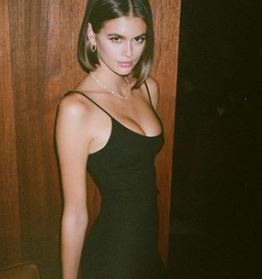 Kaia Jordan Gerber was born on September 3, 2001; the Los Angeles, California, native organically transitioned to modeling and acting following the footsteps of her parents and older brother, Presley Gerber.

On the screen, she’s been featured on Rich Kids of Instagram (2016), Sister Cities (2016) and Entertainment Tonight.
As a model, Kaia Gerber has numerous high-fashion campaigns and magazine covers under her belt -however, she’s relatively still a new face. She made her runway debut at the New York Calvin Klein Spring/Summer 2018 Fashion Week, modeling with several other young models including Julia Covert.
Kaia is also known for being the face of Chanel and boasts 4.3 million Instagram followers.

She was signed to IMG models in July 2015. Her first campaign was for cult luxury jewellery and accessories brand Chrome Hearts; that same season she starred in Alexander Wang ’s Spring 2016 ads, and fronted Miu Miu’s summer 2016 eyewear campaign. Marc Jacobs revealed Gerber as the face of its beauty line for Spring 2017; shortly after she was also cast in the brand’s 10th anniversary advertising for its best-selling fragrance Daisy.

In 2018 Gerber collaborated with the late Karl Lagerfeld to create the KarlxKaia collection; which was her first collection. In the same year, she was awarded Model of the Year at The Fashion Awards.
Gerber has landed spreads in Interview, Vogue, Pop Magazine and Self Service . Her first magazine cover was with her mother Crawford for Vogue Paris April 2016 issue. Her first solo cover was for Vogue Paris February 2018. She has also appeared on the covers of Vogue Paris, Vogue Italia and i-D.