Casey Aldridge is the ex-boyfriend of actress/singer Jamie Lynn Spears. The pair were subject of media scrutiny after becoming parents during their teens.

Casey and Jamie Lynn Spears dated fro two years before welcoming daughter Maddie Briann Aldridge, on June 19, 2008. Spears known for her role in the Nickelodeon series Zoey 101 became engaged and moved with Aldridge in March 2008. A year later they called off their engagement.

According to People he considered attending community college before eventually landing a job as a pipe fitter in Baton Rouge.

Spears’ career was put on hold and has not been the same ever since her teen pregnancy. She’s released a number of country songs including the single ‘How Could I Want More” and her first full-length album, The Journey.

While Jamie Lynn the younger sister of pop superstar Britney Spears, found love again in 2014 after she married businessman, Jamie Watson; Casey also did the same and found himself a new relationship. 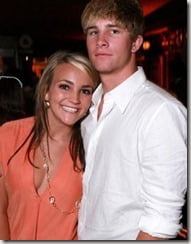 In fact, Casey Aldridge and his new girl, are the parents of one child, making Casey a father for the second time. He is married to April Watson –with whom he has a daughter named Skylar. 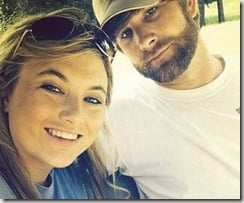 Aldridge has also grabbed headlines for a number of incidents. In 2009 he was hospitalized in Jackson, Mississippi following a car crash. At the time he and two friends had been driving home from a fishing trip in Amite Counts, when his Ford F150 was wrecked.
Last year, Radar reported he was charged with driving under the influence, possession of paraphernalia and reckless driving in Amite County, Mississippi. The 27-year-old was sentenced to 12 months probation.

Most recently his oldest, Maddie Aldridge is said to have suffered an accident while on a hunting trip.

Reports say Casey and Jamie Lynn’s daughter was on a Polaris off-road vehicle when it flipped over. The eight-year-old is said to be in serious condition.