Adria Budd Johnson aka Adria Budd is a successful producer and writer, no doubt about that, but most importantly she is the loving, caring and beautiful wife of actor Eric Johnson who most recently joined the cast of Fifty Shades Darker. Johnson portrayed Jack Hyde, the crazed boss of Anastasia Steele portrayed by Dakota Johnson.

Adria’s handsome husband was born in Edmonton, Alberta on August 7, 1979. He was still a little boy when he was enrolled at Stage Polaris. At age 15, he starred as young Tristan in Legends of the Fall alongside Brad Pitt and sir Anthony Hopkins.

By far his most memorable performance was as Whitney Fordman, Clark Kent’s rival in the television series Smallville where he met the woman who in 2004 became his wife. 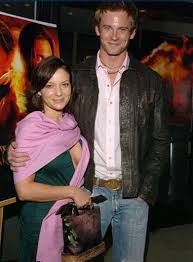 Mrs. Budd Johnson played two small characters in Cowboys Don’t Cry in 1988 and Prom Night II a year earlier. Mostly Adria has worked as a writer and producer, some of her work include ReBoot, Beauty Shot, Candy For Strangers, Blinded, and in the 2003 short film Detention.

Adria graduated from Alberta Ballet school in 1986; then in 1995 received her Diploma from Northern Alberta Institute of Technology. In 2005, she concluded her studies in business Film at UCLA.

She dated Eric for a couple of years before they tied the knot on August 7, 2004. They welcomed their adorable daughter Calla Prairie in October 2007.