Bria Vinaite is an actress and also the rumored love interest of rapper Drake.

Media noticed the two shared an intimate dinner at restaurant Sotto Sotto in his hometown of Toronto earlier this week. Miss Vinaite and Drake met at the Toronto International Film Festival –where her new movie was being screened.

Bria Vinaite plays Halley in the ‘The Florida Project’ –the drama tells the story of Moonee, a 6-year-old girl who lives with her mother Halley in a community of extended-stay motel guests in Kissimmee, Florida. Her daughter in the movie is played by Brooklynn Prince and the film also stars Willem Dafoe.

Could this be love for the always unsettled 30-yeard-old? Let’s learn more about the hot actress. 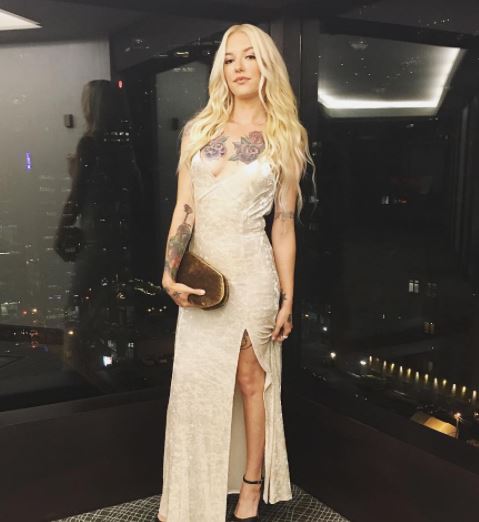 Bria Vinaite calls herself a New York native but was actually born June 10, 1993 in Lithuania. She moved to Brooklyn with her mother when she was a child. According to TV Over Mind, as a teenager she was a bit of a troublemaker and her parents had to send her to boarding school when it became too much to try to keep her out of trouble.

Believe it or not, she was apparently casted in the movie after its director, Sean Miller –discovered her on social media. That means until recently, Bria was just another mortal like you and me. Miller took a huge gamble with Bria who worked opposing Academy Award nominated, Dafoe.

Before being casted for the movie, she ran a highly profitable ********* merchandising business –which made her Instagram account, certainly pop out. During an interview, the **** blonde said that she is absolutely grateful for the opportunity and she appreciates Sean Miller believing in her.

Bria is sure to keep shining, especially if she has people like Drake by her side. At just 30, Drake ranked fifth on this year’s Forbes Five–the annual list of the world’s wealthiest hip-hop artists.

In 2016 Views became the first album to top 1 billion spins on Apple Music. He also went on a highly successful tour that took him from Atlanta to Amsterdam. But Drake also gets his cash from deals with Apple, Nike and Sprite.

With all that, we doubt these two are hooking up, Bria Vinaite happens to have a man. He is user @tattoohead and the two seem super into each other.