Ayoola Ajayi has been named as the man who killed missing Utah student, Mackenzie Lueck. Her remains were found in Ajayi’s backyard.

23-year-old Mackenzie had been missing for nearly two weeks, her disappearance prompted a massive search in Utah. Her parents reported her missing after she missed a midterm at the University of Utah and failed to board her Los Angeles flight home.
The murder suspect is to have killed the pretty blonde after a chance meeting on June 17. The two allegedly met at a Salt Lake City Park.
According to reports, 31-year-old Ayoola Ajayi took twisted measures to make sure he wasn’t caught but it was Lueck’s phone records that led police to him. Their phones show the pair left the park together around 3 a.m. 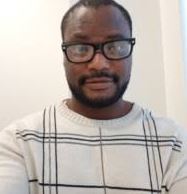 After he killed her, police says Ayoola Ajayi burned Lueck’s body and buried the charred remains on his backyard. His neighbors confirmed to authorities that they saw Ajayi burning something on June 17. Police then obtained a warrant to search his home.
After discovering evidence of a fire, police excavated the area where human female tissue and Lueck’s personal item were found. DNA tests confirmed the remains were those of Mackenzie Lueck.
Ayoola has been charged with aggravated murder, aggravated kidnapping, obstruction of justice and desecration of a body. A motive for the killing is unknown.

During the shocking press conference, authorities revealed Ayoola Ajayi and Lueck met at Hatch Park and left together. He lied to police after admitting texting her but denying ever meeting her or knowing what she looked like despite having several photos of her on his phone.

According to his LinkedIn, Ayoola Ajayi has work experience in tech support and IT for companies in Utah including Dell, Goldman Sachs and Microsoft. He’s also worked as a model and is believed to be the author of a book called ‘Forged Identity’ -shockingly the plot describes the main character witnessing a gruesome murder consisting of burning someone alive.