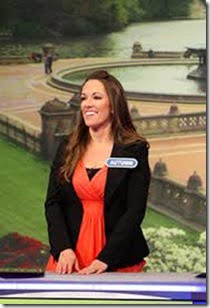 Ok, so there is some people luckier than others! Actually one million dollars luckier! I bet after this you would want to be a contestant at the epic T.V show “Wheel of Fortune” but right now the spotlight goes to 30 year old Autumn Erhard! On Thursday night she became the second person in winning the praised price! Let’s meet the million dollar worth gal, literally!

You go into this kind of things with high hopes I’m sure but to actually win a million bucks, that is just crazy! The thing is, this evdeveour is not easy at all! Erhard did the impossible! For the first time in five years since the $1 million dollar wedge was added to the large wheel in 2008, she had a shot and actually won! But in order to have a close shot at the million, a contestant must first land on the wedge, then collect it and not “go bankrupt” at all before the bonus round. Erhard managed to do so, and as she headed into the bonus round, her $1 million wedge was added to the grand prize wheel in place of the $100,000 slot. Then she had to land on it and spin solve the puzzle in just 10 seconds.

Still astonished  she managed to say

“No one could believe it! My family were just off stage and couldn’t see what my prize was. They were celebrating the fact that I solved the puzzle,” “They kept asking me how much I won, and I had to keep repeating it because no one believed me at first.”

I’m sure the price came just at the perfect time in her life since she is engage to be married! Autumn who is from Laguna Nigel, California attended the University of California in San Diego and graduated with a Bachelor of Arts (BA), Economics in 2005. She currently works as a Sales Representative at Animal Health International, Inc. You can find her LinkedIn profile here.

The sales woman said she would use part of the money for her wedding and to top it all off her total winnings came to $1,030,340 since the lucky gal had won about $30,000 in prizes before the final round! That’s just the icing on the cake yawl!!

Don’t miss the exhilarating moment when she won on the video below!